Start a Wiki
watch 01:48
The Loop (TV)
Do you like this video?
Eunice Danforth (Anita Morris) is a villainess in the 1992 episode "No Brain, No Pain" for the TV series "Eerie, Indiana".

Eunice Danforth is shown attacking a homeless man with a ray gun in a alleyway.  The attack was witnessed by Marshall Teller (Omri Katz) and Simon Holmes (Justin Shenkarow).  When Eunice took off, they rush to his aide, where all he can do is mumble nonsense.

The homeless guy is later shown to reassemble electrical appliances into bizarre contraptions.

In the last scene, Eunice has the homeless man, Marshall and Simon at gunpoint.  However, she touches the contraption on the table in front of her and is zapped with an electrical charge.  This charge knocks her backward and she is out for the count.  As a result, she is arrested. 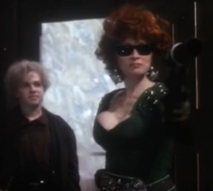 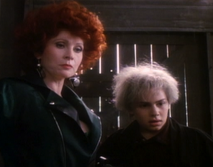 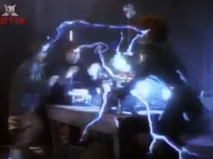 Add a photo to this gallery
Retrieved from "https://femalevillains.fandom.com/wiki/Eunice_Danforth_(Eerie,_Indiana)?oldid=77054"
Community content is available under CC-BY-SA unless otherwise noted.