Eudial (ユージアル Yūjiaru) is the first member of the Witches 5 who appears. She is a red-haired humanoid with a rank of Level 78 and able to use the "Fire Buster" flame torrent attack, named for the mineral Eudialyte is her namesake. Under the alias of Yuko Arimura (有村ゆうこArimura Yūko), she is the Etiquette class prefect in charge of Mugen Academy's Philosophy division. Eudial uses her position to bring newly enrolled students to a mountain retreat on "Mount M" for an orientation that doubles as a ritual to extract their Hosties. While retaining her human form in Crystal, Eudial assumes her medusa-like Daimon form to overwhelm Sailors Mars and Jupiter when they interfere before being killed by Sailor Moon. When Kaolinite revives the Witches 5 for her curse against the Sailor Guardians, Eudial targets Mars's insecurities and later attacks Sailor Moon before destroyed by the Outer Guardians.

In the anime, Eudial seems to be the oldest of the group, and is much resented by the others — particularly Mimete — because Professor Tomoe seems to favor her. She is referred to as Chief by the other members. Eudial is generally fairly even-tempered and level-headed; however, she is also portrayed as a reckless driver. A brilliant inventor, she is able to construct and jury rig weaponry and computer technology through the use of everyday items, like her deadly shoulder-mounted flamethrower, the Fire Buster, and later in the series booby-traps the under-construction Marine Cathedral. Eudial actually succeeds in getting two of the Talismans, but loses them to Sailor Pluto. She uses the Fire Buster to try to attack Super Sailor Moon, but she deflects it back to her. Furious, she escapes in her car, only to find that Mimete has torn out its brakes and filled it with snails. The car crashes through a barrier into the sea below, killing her instantly.

Voice actor Maria Kawamura provides her voice for the original Japanese production and Chiaki Takahashi voices her in Crystal. Canadian actress Loretta Jafelice does her voice for the Cloverway English adaptation, in which her name is changed to "Eugeal". In the Viz Media English adaptation, she is voiced by Erin Fitzgerald. In the musicals, she is played by Hitomi Tsumura and Saya Chinen. 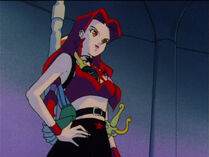 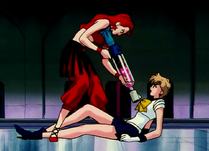 Add a photo to this gallery
Retrieved from "https://femalevillains.fandom.com/wiki/Eudial_(Sailor_Moon_S)?oldid=199751"
Community content is available under CC-BY-SA unless otherwise noted.