Etsuko Furukawa (Aiko Konoshima) is the villainess of "The Unknown Gunshot That Rings in the Dark", episode 7.25 of Case Closed (airdate April 24, 2000). She was the President of a television company and the daughter of Katsue Furukawa, the President of a finance exchange company.

Etsuko's slight backstory revealed that her company was at risk of going bankrupt, with Katsue refusing to loan her daughter money to pay off the debts she was in. Etsuko became enraged at her mother's refusal to help her, particularly due to the fact that she had previously helped her brother Koji pay off his gambling debts. Etsuko's anger led her to plot to kill Katsue, doing so on the night she invited Kogoro Mouri to her house to "protect" her mother after she received a death threat.

In the afternoon, before Kogoro's arrival, Etsuko used a ladder to climb into her mother's bedroom window. As Katsue got up to confront her, the evil Etsuko pulled out a silenced pistol and used it to kill her mother with a shot to the head. Later on, to cover up her crime and make it appear that an intruder killed Katsue, Etsuko went up to her mother's bedroom (which was locked from the inside) with the family maid Azusa Machida to check on her mother. While they were outside the room, Etsuko intentionally dropped her handkerchief so she could use the remote to Katsue's television set to turn it on just as a gun was fired in a drama being played on the channel she worked for. After Kogoro and Koji broke down the door to discover Katsue's body, Etsuko feigned heartbreak and fell to her knees, allowing her to slide the remote back into the room underneath the table.

Etsuko's scheme initially worked, with Koji and Azusa being considered as suspects. But ultimately, Conan deduced Etsuko as the true culprit, with her attempts to cover up her crime ironically leading to her reveal. During the summation Conan made while impersonating the incapacitated Kogoro, he revealed how Etsuko had tampered with the living room television and worn a more accurate digital watch to perfect her method of avoiding suspicion, while pointing out a flaw she made: she'd slid the remote too far, causing it to slide under the table where it couldn't possibly having reached via accidental fall. Ultimately, though, it was Azusa's recent cleaning of the remote after spilling iced tea in Katsue's room that revealed Etsuko as a vengeful murderer, as Katsue's fingerprints were missing from the remote. Exposed, Etsuko confessed to killing her mother, blasting her for not giving her the money she needed and revealing her harbored envy for Katsue (in her mind) caring more for Koji than her. After Juzo Megure chastised Etsuko for having killed her own mother, Etsuko was arrested (off-screen). 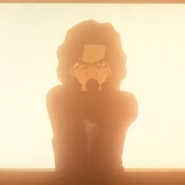 Etsuko preparing to kill Katsue
Add a photo to this gallery
Retrieved from "https://femalevillains.fandom.com/wiki/Etsuko_Furukawa_(Case_Closed)?oldid=194497"
Community content is available under CC-BY-SA unless otherwise noted.