Estella Scheele (Jesse Douglas) is the primary antagonist of "In the Realm of the Condor", the third episode of 1996 adventure cartoon "The Real Adventures of Jonny Quest".

Estella first comes to Dr. Benton Quest to ask if he and his team will help her find her ornithologist grandfather, who has gone missing in a South American jungle. When Quest casts doubts that the man is still alive, she tempts him with evidence that there is also a new archaeological find waiting for him there.

Quest agrees, and is joined by his usual companions, Race Bannon, Hadji Singh, and his son, Jonny Quest as they travel to the Peruvian rain forest. At some point in their journey, they discover a native boy being attacked by an enormous anaconda. Johnny manages to rescue the boy, who later repays the favor by leading them into a cave to escape swarm of gigantic condors. Along the way, they discover a corpse what is believed to be the missing ornithologist wearing a camera bearing the name Scheele. However, Estella shows no emotion upon this discovery and immediately suggests that they keep going. The others are stunned by Estella's coldness and start to have doubts of why she brought them here.

Further into the tunnel, the group discovers a few more condors feasting on human remains. While everybody else observes, Estella attempts to steal a precious artifact, which then triggers the doorway to the lost city of gold. While the others take a moment to study the natives from afar and watch Jonny being rewarded for saving the native boy, the greedy Estella once again moves to pilfer a jewel attached to a golden large statue. The four, including Jonny are then imprisoned by the natives. The others are horrified by Estella's actions with Dr. Quest remarking: "That was probably the stupidest thing I have ever seen a human being do!" When questioned by the others about her reckless greed, Estella reveals that she never cared for her grandfather, calling him "some idiotic old man who got lost in the jungle" and only cares about the city making her rich.

The young boy from before comes to aid them a second time by breaking them out of their condor infested cell. As they attempt to sneak past the natives, however, Estella pretends to fall. The young boy moves to help her back up, but when he does, Estella takes him hostage. She then states that she did not come all this way to leave with nothing, and that as long as she has the life of the Shaman's son in her hands, she can demand anything. She then further divulges that the ornithologist was not even her grandfather, but upon finding his statuette and the accounts of his explorations, she was able to learn the city's whereabouts.

She starts leaving the city, telling the others and the natives not to follow her or she would kill the boy. The Shaman begs her to release the boy and take what she wants in exchange, but she refuses saying that the boy is her meal ticket to great riches.

Jonny goes after Estella and confronts her atop a high stone bridge above a crevice. Jonny tries to make Estella see reason by saying that they would of been fed to the condors if the native boy hadn't of saved them. The greedy, selfish woman brushes this off and reaffirms that treasure is the only thing that matters to her. Jonny tosses her a golden condor statuette to let the boy escape. Jonny tackles Estella as she attempts to grab it, resulting on them hanging over the bridge. Estella suddenly loses her grip whilst hanging onto Jonny and plummets into the crevice where she falls face-first on the rocks below, killing her on impact.

It's revealed that Estella isn't the missing ornithologist's granddaughter at all. The leader of the natives (Dr. Scheele himself) revealed that he had no children before he first discovered the city, and that the boy is his only grandchild. 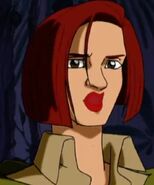 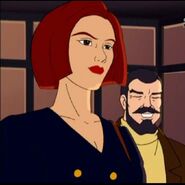 Add a photo to this gallery
Retrieved from "https://femalevillains.fandom.com/wiki/Estella_Scheele_(The_Real_Adventures_of_Jonny_Quest)?oldid=206014"
Community content is available under CC-BY-SA unless otherwise noted.