Esmeraude, also known as Green Esmeraude, is a major enemy in Sailor Moon.

Esmeraude is infatuated with Prince Dimande, giving the Sailor Guardians a warm welcome in 30th century Tokyo after her subordinates Chiral and Achiral failed to eliminate them. Esmeraude overpowered Sailor Moon until she was killed by Tuxedo Mask with the aid of his future counterpart.

Esmeraude did not like Rubeus much, and was there to rub it in his face when all his attempts to take over Tokyo failed. She left him to die as his ship exploded after he was defeated by the Sailor Scouts, and from here, she took over trying to take over Crystal Tokyo. Her plans involved using Dark Wedges provided by Sapphire to fill Tokyo's vulnerable spots with dark energy, but all her plans were foiled by Sailor Moon.

Eventually, Diamond called Esmeraude back to the future. When the Sailor Scouts, Rini, Tuxedo Mask, Luna, and Artemis entered the Time Warp to go to the future, she sent a droid after them, but they destroyed her. When Diamond tried to hypnotize Sailor Moon, and Tuxedo Mask stopped him to help Sailor Moon escape, Emerald attacked Diamond from the shadows, as she does not want him to be distracted by her.

Esmeraude asked Wiseman for power to destroy the Sailor Scouts and get Prince Diamond to like her. Wiseman gave her a crown powered by the Black Evil Crystal, saying that with it she could do both. However, the power of the dark crystal was too much for her and transformed her into a hideous dragon. She attacked the Crystal Palace and fought the Sailor Scouts. Sailor Venus attacked her with Venus Love Chain Encircle, scratching her, but she healed the cut. Sailor Jupiter zapped her with Jupiter Thunderclap Zap, but she survived. Sailor Mars attacked her with Mars Celestial Fire Surround, but she seemed unaffected. Sailor Mercury froze her tail with Shine Aqua Illusion, but she shattered the ice. As she was breathing fire at them, Tuxedo Mask hit her in the crown with a rose, and Sailor Moon destroyed her with Moon Scepter Elimination. She briefly reappeared before falling into a void to her death.

Esmeraude is very vain, selfish, greedy, jealous, and has a horrible laugh. She is also easily distracted by cakes. She loves hot baths and jewelry which gives her somewhat easy-going but extravagent and selfish personality.

Esmeraude attacks by throwing dark energy balls or shooting waves of dark energy (though we only ever see her try to do the first, and the second she is offscreen unnoticed by anyone except Sapphire when she does the attack). 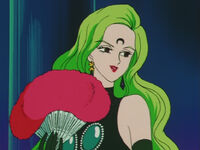 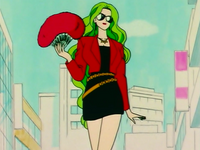 Add a photo to this gallery
Retrieved from "https://femalevillains.fandom.com/wiki/Esmeraude_(Sailor_Moon)?oldid=194445"
Community content is available under CC-BY-SA unless otherwise noted.