Erin Bryant is a minor villainess from "Lifeless in Seattle", case #51 of Criminal Case: Save the World, the 3rd season of the crime solving game Criminal Case (release date September 29, 2016). She was the public relations officer for O.M. MediLab, a supposed medical company that was really a front for an international terrorist organization known as SOMBRA.

Erin was first approached by the player and Jack Archer in regards to the murder of Kelly Purcell, after she did a press conference in support of USNay (a movement whose goal was to have the United States leave the Unified Nations). When questioned by the player and Jack, during which the latter pointed out the previous run-in the Bureau had with O.M. MediLab in Tibet, Erin defended the company, claiming everything they did was legal and that they shared USNay's belief that the Unified Nations was corrupt.

The villainess then became a suspect in Kelly's murder once it was discovered that she was providing her with anti-anxiety medication in what appeared to be an effort to bribe the journalist for her company's benefit. However, when she was confronted about her actions, Erin claimed she gave the medicine to Kelly to help her with the stress that came with her profession and asked the detectives to direct any more questions to O.M. MediLab's legal department.

While Erin was ultimately cleared in regards to Kelly's murder, a folder belonging to the former was discovered at The Great Coffee Seed, a Seattle cafe where she had been having meetings with politician Robert Hicks (USNay's founder). After examining the files in said folder, Elliot Clayton confirmed that they revealed how O.M. MediLab had been evading taxes in all the countries where they did business. After that, the player and Jack approached the greedy conspirator once more at the same cafe and placed her under arrest for complicity in tax evasion, but not before informing her that the information from her folder was enough to shut O.M. MediLab down permanently. 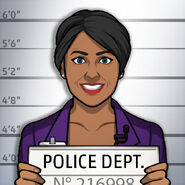 Add a photo to this gallery
Retrieved from "https://femalevillains.fandom.com/wiki/Erin_Bryant_(Criminal_Case)?oldid=161960"
Community content is available under CC-BY-SA unless otherwise noted.