Erikah was a well-known voodoo priestess in the area and was feared throughout much of the community for her knowledge of voodoo spells. But as revealed in "Smoke and Mirrors", Erikah's image as a voodoo priestess was simply a ruse to hide her true profession: the owner of a brothel hidden deep within the bayou forest.

Erikah enslaved several young women desperate for money to use as prostitutes, and prior to the events of the case, had killed three women who tried to leave her depraved business. When prostitute Vanessa Kimmel became pregnant with the child of client Alec Howard, she escaped Erikah's clutches to protect her baby and began to expose Erikah as a murderous madam. Wanting to silence Vanessa and continue using voodoo to keep her business hidden, the evil Erikah strangled Vanessa to death before turning her into a voodoo doll, sewing her mouth shut and replacing her eyes with buttons.

Erikah also burned down the large house she used as her brothel to cover her tracks, but her connection to the business was discovered when a smashed portrait of her was found inside the burning building by the player and detective Amy Young. Erikah lied and claimed the portrait was from when she used to work at the brothel, but her true role and her murderous actions were eventually uncovered by the detectives. After unsuccessfully trying to scare Amy and the player away using a voodoo doll, Erikah confessed to being the owner of the brothel and of the murders she'd committed, boasting of how easily she'd deceived the people of Bayou Bleu and how easily she'd enslaved her victims.

After admonishing Erikah as a fraud and murderer, Amy placed Erikah under arrest. At her trial, Erikah attempted to plead that the men who abused her during her time as a prostitute were truly at fault, only for judge Edward Dante to lambaste Erikah for exploiting desperate women and for scaring her community into not seeking justice against her. Erikah was ultimately sentenced to life imprisonment. Erikah appeared again in Criminal Case: Pacific Bay's final case, "The Final Countdown", as a suspect in the murder of detective Frank Knight. Once her innocence was proven, however, Erikah helped Amy and the player escape from the virtual reality they were put in by Albert Tesla after the detective duo defeated the maniacal villain. 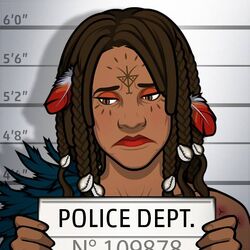 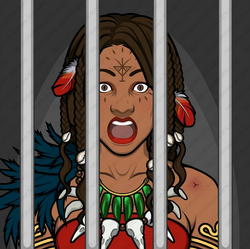 Add a photo to this gallery
Retrieved from "https://femalevillains.fandom.com/wiki/Erikah_Mabayo_(Criminal_Case)?oldid=146169"
Community content is available under CC-BY-SA unless otherwise noted.