They are searching for Hungary's lost and allegedly cursed Royal Sceptre.  In 1897, the Great Brodsky (Nicolas Van Burek) impressed his royal audience of Emperor Franz (Brian Paul) and Empress Elizabeth (Stavroula Logothettis) at Budapest with a message from the spirit world that the Hungarian King's scepter was cursed and must be removed.  Immediately the scepter disappeared, and it stayed lost for a century.  The journal of a Scotland Yard investigator brings the search for the lost artifact to the Magic Mansion in Atlantic City.  Only magician's are allowed in the Mansion, so Sydney and Nigel pose as Rex's assistants, where they meet the most skilled magicians of the day.

During the show, Sydney and Nigel drop into the pit during an illusion that nearly gets Nigel killed when someone bolted the trap door shut as Rex thrusted swords into the box where he was hidding.

Erica is revealed to be the person behind the crazy going ons, and meets Sydney in a hidden throne room in the labyrinth.  Sydney figures out that Erica is a descendant of the Great Brodsky as she locks them up and tells them that Rex will never look for them down there.  When Erica leaves, Sydney asks Nigel to pick the whalebone out of her bustier with his teeth, then they pick the lock with the bone.  The two get back into the box in time for the end of the act.

A final confrontation takes place in a room full of mirrors located in the mansions secret labyrinth of hidden passageways.  A fight ensues, and Sydney throws Erica through one of the plate windows, knocking the villainess out.  Erica is arrested and taken away by the authorities. 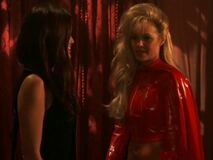 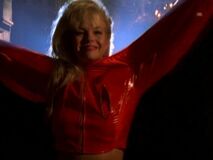 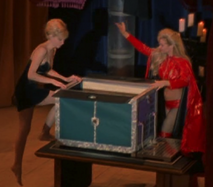 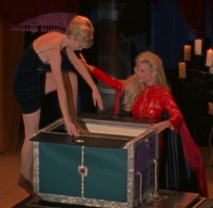 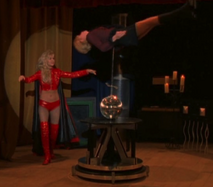 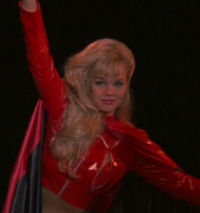 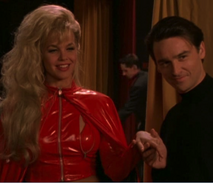 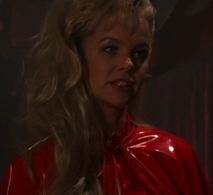 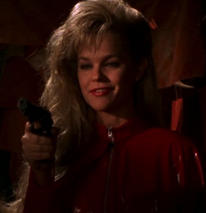 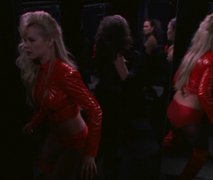 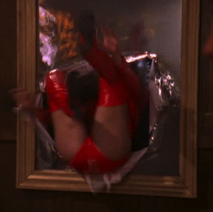 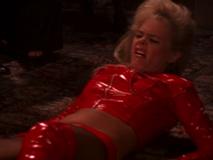 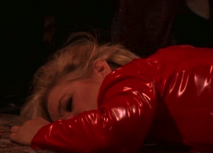 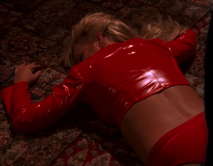 Add a photo to this gallery
Retrieved from "https://femalevillains.fandom.com/wiki/Erica,_The_Erotic_(Relic_Hunter)?oldid=167321"
Community content is available under CC-BY-SA unless otherwise noted.