The unnamed Envious Sisters were villainess from "The Case of the Furisode at the Hidden Hot Spring on a Snowy Night", episodes 13.26 and 13.27 of Case Closed (airdates November 22 and 29, 2004). They were the villains of a local legend of the Yonezawa mountains village, Yamagata Prefecture, where the Kotoya Inn was located, having been the daughters of the village's then leader.

When a local girl named Ohana nursed a wounded samurai back to health, the man repaid her for her kindness by giving her a collection of beautiful furisodes and obis (kimonos and kimono sashes). Upon seeing Ohana's good fortune, the sisters became jealous and plotted to take Ohana's gifts for themselves.

To do so, the evil sisters falsely accused Ohana of slander, leading the magistrates to confiscate Ohana's furisodes and obis before sentencing her to execution. On the same night of Ohana's death, the sisters responsible for her wrongful execution stole her furisodes and obis. But as the girls lavished in their ill-gotten gains, they were suddenly attacked by the vengeful spirit of Ohana, transformed into an immortal demon thirsty of blood with a cold breeze powers, with the girls later being found dead amongst the stolen clothing. The younger sister was found to have been strangled to death, while the eldest was discovered to have been drowned in a garden pond. 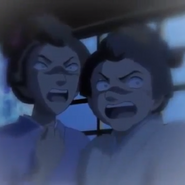 The sisters' looks of shock as they are confronted by Ohana, who is reborned as an evil demon. 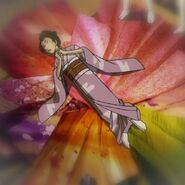 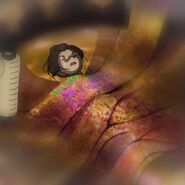 The eldest sister's deceased body.
Add a photo to this gallery
Retrieved from "https://femalevillains.fandom.com/wiki/Envious_Sisters_(Case_Closed)?oldid=199757"
Community content is available under CC-BY-SA unless otherwise noted.