Start a Wiki
watch 01:48
The Loop (TV)
Do you like this video?
Emma is a professional wrestler currently portraying a villainess in WWE.

After a stint on WWE's main roster, Emma returned to NXT in January 2015, claiming that things didn't go as she planned. She began to take her frustrations out on Bayley in March, doing so by criticizing Bayley for being fan-friendly, claiming that it will get her nowhere. In a later edition of NXT, Emma continued to criticize Bayley's niceness, which prompted Bayley to stand up against Emma's rhetoric. In response, the evil Emma delivered a slap to Bayley. On April 1, Emma was defeated by Bayley, but continued to target her in the weeks that followed. In April, Emma formed an alliance with the evil Dana Brooke, and the pair feuded with Bayley and Charlotte for several weeks. The duo competed in a losing effort against Charlotte and Bayley at NXT Takeover:  Unstoppable.

On the following week, Emma defeated Bayley via submission, and after the match, she and Dana Brooke attacked Bayley and Charlotte. Emma stated that she was tired of being overlooked, claiming that she started the uprising in the Divas Division. After feuding with Bayley, Emma began feuding with Asuka after the debuting star soundly defeated Dana Brooke at NXT Takeover: Respect. Emma would get her chance at Asuka at NXT Takeover:  London, but she was defeated. 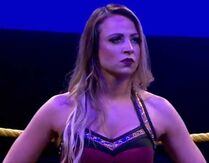 Emma's heel entrance
Add a photo to this gallery
Retrieved from "https://femalevillains.fandom.com/wiki/Emma_(WWE)?oldid=185857"
Community content is available under CC-BY-SA unless otherwise noted.