Start a Wiki
watch 01:51
The Loop (TV)
Do you like this video?
Emma (Elizabeth Sena Kovacich) is the villainess of Scars, a short horror film from TApes Media (release date November 19, 2015). She was a young woman out at a club, with the film opening with Emma in the bathroom, having flashbacks to her time partying in what appeared to be a panic attack.

When she heard people approaching the bathroom, Emma quickly hid inside one of the bathroom stalls, allowing her to listen in on the conversation of three friends who entered the bathroom. After the women talked about their night out as Emma anxiously bit her fingernails, one of the women brought up how she'd seen Emma, revealing that the women knew Emma. The trio then began to mock Emma's appearance, claiming she had "really let herself go".

Upset by the women's comments, Emma suddenly began to gnaw into her own arm, with the blonde member of the trio overhearing her and opening the stall door to see Emma after she had just finished tearing off a chunk of her flesh. As the woman stared in horror at the sight, Emma turned heel by attacking the blonde and biting into her neck, frightening her friends into fleeing the bathroom. As the blonde woman fell to the floor and began to bleed to death, the evil Emma (her face now bloodied) looked up with a satisfied expression. 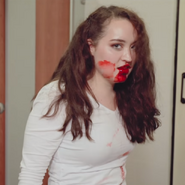 Emma's evil stare
Add a photo to this gallery

Retrieved from "https://femalevillains.fandom.com/wiki/Emma_(Scars)?oldid=119861"
Community content is available under CC-BY-SA unless otherwise noted.