Ema Anzai (Haruna Ikezawa) was a villainess from "The Case of the Furisode at the Hidden Hot Spring on a Snowy Night", episodes 13.26 and 13.27 of Case Closed (airdates November 22 and 29, 2004). She was a rising oil painter who was at the Kotoya Inn (along with several other people) to work on a new TV drama.

Her backstory also revealed that, while attending school at Oodou University, she and her colleague Asuka Shibasaki began selling drugs, though no one would report them out of fear of their influential families. Ema and Asuka often fought with classmate Sakurako Suzuka over their crimes, leading the girls to frame Sakurako, planting drugs in her locker to incriminate her. With the accusations being believed by many, the despondent Sakurako was driven to commit suicide by jumping from the university roof, allowing the evil Ema and Asuka to avoid being punished for their crimes.

In the episode's present events, Ema and Asuka reunited at the Kotoya Inn for the TV drama, where they were introduced teasing singer Harumi Fukatsu (Sakurako's friend who had also been invited to join the TV show) by claiming that her fame wouldn't last long. Another member of the team for the TV drama was novelist Eri Akechi, who unbeknownst to Ema and Asuka, was Sakurako's sister who had joined the drama cast as a means of taking revenge on the women she blamed for her sister's suicide. Asuka went about killing Ema by luring her to the Inn's shrine, leaving her a note (which she forged in the style of Kyoichi Bando, the producer of the TV drama) to lure her to the shrine before stabbing her to death. Eri then left her body on top of a variety of furisodes (kimonos), wanting to mirror the local legend of the "Furisode Hannya", which bore similarities to what happened between Asuka, Ema, and Sakurako. 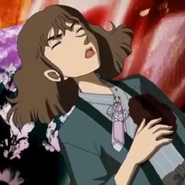 Ema's deceased body
Add a photo to this gallery
Retrieved from "https://femalevillains.fandom.com/wiki/Ema_Anzai_(Case_Closed)?oldid=194548"
Community content is available under CC-BY-SA unless otherwise noted.