Dr. Elsa Schneider (Alison Doody) was the hidden villainess and anti-heroine in the 1989 film Indiana Jones and the Last Crusade.

A trained archeologist, Dr. Schneider seduces both Indiana Jones and his father in the Nazis' ruthless quest of the Holy Grail for Hitler.

Her Pursuit of the Grail Edit

Elsa's success allows the Nazis to capture the Joneses and secure the elder Jones's diary, which leads the Nazis to the grail's secret temple.

Once there, Elsa and Walter Donovan (the film's main antagonist) follow Indiana into the grail's chamber. Inside, the room contains numerous chalices and the guardian tells them they must choose.

Elsa, using her cunning deception, offers to select the grail for Donovan. She hands him a random cup that she assumes is fake and watches him age to death after drinking from it. Her actions remove him as an obstacle between her and grail.

Afterwards, Elsa finds an opportunity to take the real grail outside the temple but, in the process, she accidentally sets off an earthquake trap.

She drops the grail and almost falls into a crevice chasing after it, but Indiana grabs her at the last second. She spots the grail nearby and pulls a hand free to reaches for it. Her gloved hand comes up inches short of grasping it, while her other hand is slipping from its leather glove.

Elsa's obsession for the grail proves to be her undoing. Despite Indiana telling her she's going to fall and lose her life, Elsa persists because she's so close to succeeding. Before she can, however, the leather glove on her other hand finally slips off and Elsa falls to her death in the abyss below. 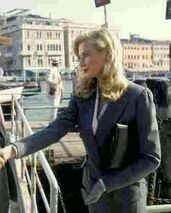 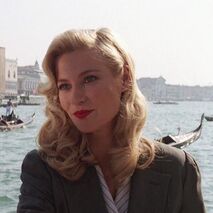 Elsa charms Indiana while in the Venice Library. 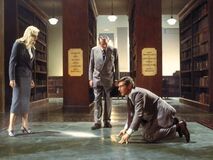 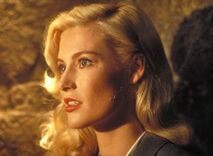 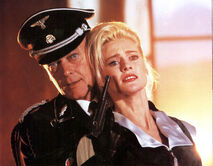 Elsa continues seducing Indiana even after she's revealed herself as a Nazi. 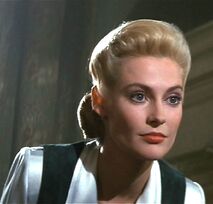 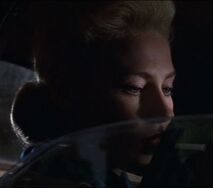 Elsa accepts a light in the back of the car when speeding away from she thinks is the Jones' fiery "death". 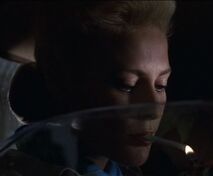 Indy Jones in Nazi disguise, confronts Elsa at a Nazi rally in Berlin. 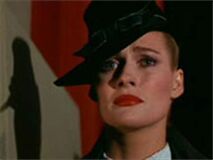 Elsa in her "desert" attire. 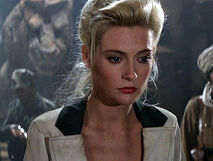 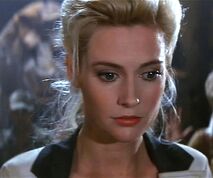 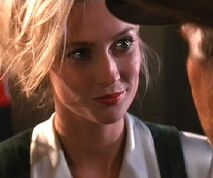 Elsa reveals herself as a Nazi spy.

Elsa finally has the grail in her hands. 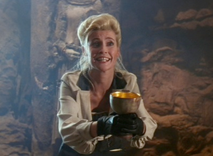 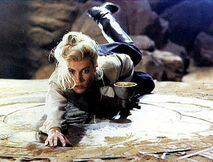 Elsa desperately reaches for the grail as she hangs over a chasm.

Her leather glove slips off and she falls to her death.

Add a photo to this gallery
Retrieved from "https://femalevillains.fandom.com/wiki/Elsa_Schneider_(Indiana_Jones_and_the_Last_Crusade)?oldid=202057"
Community content is available under CC-BY-SA unless otherwise noted.