Start a Wiki
watch 01:48
The Loop (TV)
Do you like this video?
Elsa Riley was the villainess of the final Moon Raven Tales story, "The Heartless and the Wicked" (release date August 9, 2018). She was the sister of Erik Riley, and the story's opening showed the pair with their father Paul driving through the desolate country, with their father yelling for his children (complaining of how long they'd been driving) to be quiet.

It was ultimately revealed that the Rileys were criminals, having just gotten away from committing a robbery, during which time Paul had to abduct a young woman after she was able to injure Erik's leg and remove his mask during their crime. After growing tired of his children's antics, Paul told the children to get out of the car, with Elsa going to use the bathroom as Paul and Erik checked on their bound and gagged victim in the trunk. When Elsa returned, she callously mocked the woman's terror before Paul killed her with a bullet to the head, splattering Elsa's shirt with her blood and Elsa yelling at her father for giving her no warning.

After killing the woman, Paul got back into the car and announced his intentions to leave his children behind, lambasting them for showing no compassion to their mother before her death and proclaiming that he believed they were incapable of feeling any sort of emotion. Mr. Riley's rant, as well as his warning to Elsa and Erik about real evil in the world, were met with outrage and whines from his children, with Elsa cruelly stating that her father had to get over their mother's death before he drove away. Elsa later begrudgingly left the wounded Erik behind to find help, eventually coming across the Cooper household and convincing Jeremiah Cooper to drive her down to road to where Erik was waiting. Jeremiah took the siblings back to his house where his wife Abigail treated Erik's leg. While suspicious of the blood on Elsa's shirt (Elsa claimed it was from Erik after he injured himself while they were hiking), Jeremiah was convinced by Abigail to let them stay with them until the next train came through town.

Elsa took an instant disliking to her and her brother's new surroundings, and later mocked Jeremiah's old scarecrow Harold before putting out her cigarette on him. While out in town getting things from the general store, Elsa mocked the kind-hearted but slow-witted store clerk Boone Palmer (who had a stutter) before taking notice of the store's large safe. Wishing to rob the safe, Elsa flirted with Boone and goaded him into revealing that the safe contained money from the town's store, hotel, diner, and the proceeds from the recent town festival. Back at the Cooper farm, Elsa detailed her plans to use her budding friendship with Boone to steal from the safe and flee town to Erik, who reluctantly said he'd think it over. The next day, after being awoken by strange footsteps on the roof, Elsa continued her abuse towards Harold by teaching Jeremiah and Abigail's grandson Sam how to fire a pistol, using it to shoot Harold's head off.

Later on, Elsa returned to the store with Sam to get food for Jeremiah's animals. There, she convinced Boone to let her store something of value in the store safe, stealing a ring of Abigail's to serve as that item of value. That evening, Elsa told Erik of her plans, as well as boasting of how she believed she could convince Boone to do anything for her, the siblings were alarmed by a noise outside the cabin they were staying in, finding Harold on the front porch. Despite Erik becoming unnerved by the fact that the bullet hole Elsa fired into Harold's head was missing, Elsa dismissed his concern and threw Harold off the porch, claiming they would set him on fire next time he "left his post".

Elsa went to Boone the next day to ask him to put the ring in the safe, claiming it was from her late grandmother. Boone agreed to do so, taking Elsa out to the local diner for a date afterwards. When they returned, however, the two were confronted by Bobbie Jo Elder, a frequent customer of the store who often bullied Boone and was known for wrestling hogs with her brothers. As she threw her usual insults at Boone and ordered him to get the supplies she needed, Elsa stepped up and confronted Bobbie Jo, eventually pulling out her knife and holding it to her throat. Elsa seemed to calm down after Bobbie Jo proclaimed that neither killing her or releasing her would end well for her, only to suddenly begin punching Bobbie with bass knuckles, bloodying her face severely before Boone stopped her. The evil Elsa then held the semi-conscious Bobbie Jo at knifepoint, threatening to kill her if she ever came near her again. After Bobbi Jo left, Elsa attempted to reassure the horrified Boone that she wasn't serious in her threat against Bobbi Jo and remarked that she probably wouldn't tease him anymore.

The next day, Elsa came to the store with Erik to retrieve her ring, claiming she and Erik were leaving town for a while. After Boone opened the safe, Erik shot and killed him, with Elsa initially blasting her brother for going against their original plan of knocking him out. But eventually, after Erik pointed out that Boone would have told the police after he woke up, Elsa began helping Erik hide Boone's body, cruelly mocking him by imitating his stutter. But before the two could leave the store, Sam suddenly came in and was horrified to realize the two had killed Boone with the intent of robbing the store, fleeing as Elsa chased after him with her knife. In the forest, Sam attempted to escape Elsa after knocking her out with a rock, but Elsa was ultimately able to subdue and kill Sam by stabbing him in the chest with her knife, leaving his body in the woods before returning to the store, where she found that Erik had already killed Boone's father, Mr. Buck, who owned the store, as well as the town's hotel and diner.

After getting Boone's truck, however, Elsa was surprised when Erik drove them back to the Cooper farm, adamantly stating that they had to kill Jeremiah and Abigail to fully cover their tracks, then they would take Jeremiah's truck and swap it for another vehicle when they reached a different town. Elsa reluctantly agreed and followed her brother, only to be unnerved to find the farm eerily quiet and seeing many of the farm animals dead. After searching the house and seeing that Jeremiah and Abigail were nowhere to be seen, the siblings went back to the cabin they were staying in and were horrified to find a bloody scene in front of the shack: a dinner table with two bloody skeletons (likely Jeremiah and Abigail's) sitting at it, with their peeled skin serving as a grotesque makeshift tablecloth.

Just as the two siblings were about to flee, they heard a sound suddenly come from the shack--which was ultimately revealed to be coming from Harold, who was on the porch and finally revealed himself to be alive by standing up. Erik attempted to kill Harold by shooting him with his pistol, but after two unsuccessful attempts to do so, Harold attacked Erik and grabbed him by the wrist, shoving Elsa away when she stabbed him in the face in an effort to save her brother. As Erik grabbed Harold, Elsa tried to run for help, only to be subdued when Harold took the knife out of his head and threw at her, piercing her side. Harold then painfully yanked the knife from Elsa's body before returning to the wounded Erik, with Elsa being forced to watch in horror as Harold eviscerated and decapitated Erik, using his corpse to add to his demented dinner scene. Elsa was then attacked by Harold herself, who dunked her head in a barrel of steaming black acid, which boiled her head down to a skeleton, with Harold nailing her to his post before she finally succumbed to her injuries and died. 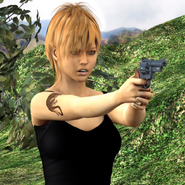 Elsa's grisly demise
Add a photo to this gallery

Retrieved from "https://femalevillains.fandom.com/wiki/Elsa_Riley_(Moon_Raven_Tales)?oldid=181032"
Community content is available under CC-BY-SA unless otherwise noted.