Start a Wiki
watch 01:51
The Loop (TV)
Do you like this video?
Ellen Robertson (Gabrielle Carteris) is the main villainess from the 2001 TV film, Malpractice.

Ellen Robertson was born into a wealthy Atlanta family, but when she was six, her father lost everything and committed suicide. Five years later, Ellen's mother also passed, leading to Ellen being bounced around from one foster home to another. As she grew into adulthood, Ellen began using her looks and feminine wiles to get what she wanted:  money and a man.

Ellen got married at age 20, though it ended due to her husband being killed in a boating accident (with no confirmation on whether it was truly an accident or if Ellen killed him). She worked as a nurse at Riverside General Hospital, where she met married surgeon Ken Garrett. The pair engaged in an illicit affair during Ken's brief estrangement from his wife, Beth (the film's main protagonist), but when Ken decided to end their affair, Ellen became vengeful and enraged. The villainess fatally sabotaged Ken's surgery on a young boy, doing so by performing an incision that resulted in the child bleeding to death. As a result, Ken was blamed for the botched surgery, and he was placed on suspension while Ellen and the rest of his staff were fired.

The very beginning of the film showed Ellen outside the operating room, where her fiancee, Arthur Grossman, was undergoing gall bladder surgery. Arthur ended up dying due to an accidental fatal amount of diprivan, and later on, Ellen approached Beth and hired her as her counsel in her lawsuit against the hospital. Ellen's true villainous persona began showing itself when she appeared to Ken at his home; drinking a glass of champagne and attempting to seduce him, which revealed their past as illicit lovers. Ellen revealed that she works as a private nurse, working at a facility where Beth's mother resides, and she began stalking Ken continuously. It was also revealed that Bonnie Canuso was the nurse who worked on the Grossman surgery, and was named as the one responsible for the fatal diprivan dosage. Bonnie was later found dead of an apparent suicide, but the death played a role in Ellen's reveal as a cold-blooded villainess.

Beth found out Ellen's backstory, which included her affair with Ken, and following this, Beth informed Ellen that she would no longer represent her, while noticing a photo of Beth's family in her possession. Furious over her plans being thwarted, the evil Ellen attempted to kill Beth's mother by poisoning her cranberry juice, and she later confronted Beth in a parking garage, making threats towards her even after Beth drove away.

The film's climax saw Beth lured to the hospital by Ellen, who appeared and held her and Bradley (the hospital's administrator) at gunpoint. It was there that truth about Grossman's death was revealed: he was leaving Ellen for Bonnie, and it was Ellen who killed her fiancee and set up Bonnie, who she later killed in a fit of vengeful rage. Ellen was also revealed as the one who killed Ken's patient, also doing so out of revenge, and she planned to get evidence of her villainous actions from Bradley. Ellen later shoots and kills Bradley, but her attempt on Beth misses after Beth diverts her with a flash from her cellphone camera. A chase ended with Ellen shooting Beth and leaving her for dead (Beth survives), and later threatening Ken when he arrived. Ken held Ellen at bay, but opted to rush to Beth, allowing Ellen to get away. However, the villainess ended up surrounded by police, and she was later handcuffed and arrested. 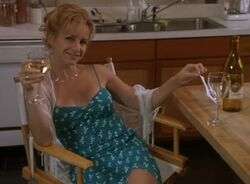 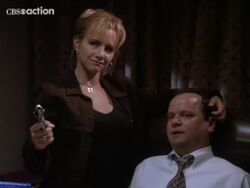 Add a photo to this gallery
Retrieved from "https://femalevillains.fandom.com/wiki/Ellen_Robertson_(Malpractice)?oldid=145104"
Community content is available under CC-BY-SA unless otherwise noted.