Ellen Morowitz is the villainess of "Dead in the Water", case #26 of Criminal Case: Save the World, the 3rd season of the crime solving game Criminal Case (release date March 31, 2016). She was an American artist who was working on her art in the Sichuan province of China.

When social worker Li Jun was found dead at the Lotus Bridge, Ellen was questioned after a self-portrait she made at the Bridge was found by the player and Jack Archer. Ellen claimed that she had no knowledge of Li's murder, but bemoaned that someone could be murdered in such a beautiful place. When it was discovered that Ellen had previously filed forms to adopt a child with Li Jun's adoption agency, Ellen claimed that she didn't realize Li worked with the agency and that she had decided that her career wouldn't fit well with motherhood.

However, it was ultimately proven that Ellen actually had recognized Li, and had been Li's killer. Ellen had been dead set on adopting a baby, and was enraged when Li rejected her application on the grounds of believing her art career wouldn't be able to provide a stable life to a child. Ellen's rage increased when she spotted Li by chance in China during the case's current events, with Li not recognizing Ellen. With that, the vengeful Ellen attacked and killed Li at the Lotus Bridge, striking her in the head with a jade vase and dumping her corpse in the river. Li fought back and left a bruise on Ellen's forehead, with this (among other clues) proved Ellen's guilt.

The player and Jack brought Ellen in for interrogation, and after initially proclaiming innocence, Ellen confessed to killing Li Jun, blasting her for rejecting her attempt to have a baby and boasting that she deserved to die for (in her mind) destroying her life. Ellen was arrested and put on trial, where she continued to show no remorse for Li's murder, leading judge Nigel Adaku to sentence her to twenty years in prison. At that, Ellen wept at the end of her career, still proclaiming that Li ruined her life. 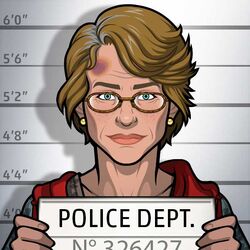 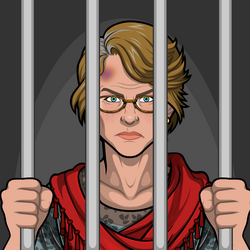 Add a photo to this gallery
Retrieved from "https://femalevillains.fandom.com/wiki/Ellen_Morowitz_(Criminal_Case)?oldid=147106"
Community content is available under CC-BY-SA unless otherwise noted.