Ellen Hart (Darl Chryst) was the villainess of the 2009 film Blood Guardian. She was the mother of Jason Hart, with the film's opening having Ellen in the midst of a heated argument with her husband, Jonathan. As revealed during the argument, Ellen was a drug addict, with Jonathan becoming furious with Ellen after he learned she had reneged her promise to get clean.

After flushing Ellen's drugs down the toilet, Jonathan blasted Ellen for her addiction and revealed his intents to leave with Jason. But as Jonathan and Jason began packing, Ellen suddenly turned heel by stabbing her husband to death with a knife, enraged at him for getting rid of her drugs. After seeing what his mother had done, Jason (12 years old at the time) took the knife and contemplated killing Ellen, only to instead drop the knife. At that, Ellen callously tried to convince Jason to take the blame for his father's murder, forcing him to hold the knife again and smearing his blood onto him, only to be caught by police officer Thomas Elway and arrested, being placed in a mental hospital.

Fifteen years later, with Jason now on parole and running a landscaping business, Ellen escaped from the hospital after a power outage and began killing people connected to Jason, starting with two of his clients, Charlene Williams and Carl Price. Among the other murders were of Jason's recently fired co-worker Dusty and his girlfriend Carly, with Ellen stealing drugs and money from Dusty's trailer after the murders. Soon after killing a woman who Jason fought with while trying to help her fix her car, Ellen called investigating detective Leslie Newman (who suspected Jason of being responsible for the murders) and lured her out to an isolated house under the claim of having information, where she killed her by stabbing her in the back with a hammer before shooting her with her own gun.

The film's climax had Thomas informing Jason of his mother's release as they arrived at his apartment, only to find Jason's girlfriend Regan bound and gagged to a chair. It was then that Ellen emerged and pointed Leslie's gun at the pair, eventually shooting Thomas (non-fatally) after taunting him about killing Leslie. After forcing her son at gunpoint to move away from Thomas, Ellen was confronted by Jason, who blasted her for killing his father and destroying his life, with the evil Ellen claiming her arrest was worse and blasting Jason for never visiting her, while proclaiming that she was his mother and he was to listen to her. Ellen then held Regan hostage while blasting Jason for (in her mind) choosing Regan over his mother, while delusionally claiming she killed all her victims to protect Jason. After ignoring Jason's pleas for her to stop, Ellen killed Regan by slitting her throat before preparing to finish off Thomas, only to be tackled by Jason. Despite attempts from Thomas to stop him, Jason proceeded to use the knife Ellen used to kill Regan to stab his psychotic mother to death. 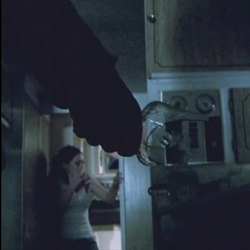 Ellen's hand as she prepares to kill Dusty's girlfriend 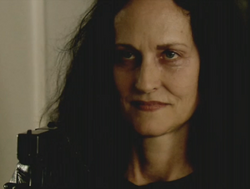 Ellen holding Thomas and Jason at gunpoint
Add a photo to this gallery
Retrieved from "https://femalevillains.fandom.com/wiki/Ellen_Hart_(Blood_Guardian)?oldid=163904"
Community content is available under CC-BY-SA unless otherwise noted.