Start a Wiki
watch 01:51
The Loop (TV)
Do you like this video?
Elke Kleinschmidt (Heather Bonomo) is the primary antagonist in the 2013 episode "Operation: Hard Kill in Fresno" (episode 36) for the action comedy web series "The Adventures of Superseven".

The episode starts out by Superseven (Jerry Kokich) arriving at the  Crumbley Hotel room of Sandra West (Olivia Dunkley).  He is attempting to hid her there until he can successfully get the mind control micro chip out of her head.  Sandra is mysteriously dressed in a blue belly dancer outfit, and puts on a little show for him.

Suddenly they are surpised to see a gorgeous blonde dressed in a French Maid outfit holding a pistol with silencer attached to it.  The outfit includes a one-piece black satin skirt dress, with white ruffles around the bottom of the skirt and top of the blouse.  She has a white apron around her waist and a black one-inch thick velvet choker around her neck.  She is wearing white/black high heels, and black fishnet stockings that accentuate her lovely legs.

Sandra sarcastically exclaims, "Another French Maid", and then after looking down at her shoes, she adds, "With pretty shoes!"  Elke demands in a German accent, that they both get on their feet.

When Superseven makes the comment that she looks strangely familiar, Elke says, that she should, since he killed her "identical cousin, Fifi LeBlanc (also played by Heather Bonomo).  Seven corrects her, and points at Sandra.  Miss West looking up long enough from Fifi's high heels, admitted "Oh, that was me, she was a terrible shot, but had great taste in shoes.  Like you!"

Superseven made the statement, that Elke didn't sound French.  the assassin then introduced herself as "Elke Kleinshmidt, and like my cousin, I also work for T.H.E.Y."

After Sandra started rambling, Elke made the comment that she  would get great pleasure in putting a hole in a pretty head.  With that, Elke said, "Say Auf Wiedersehen Miss West", and was about to pull the trigger when a machine gun noise sounded instead.  Elke looked stunned as she began to stumble around the room.  As she lost her balance against the wall, Valdo (Terry Shane), the bodyguard of Sue Muru (Barbara Luna) walked in holding a machine gun.  Elke continued to melo-dramatically stumble from one side of the room to the other, with stops in the bathroom and a brief stop in front of the mirror to check her hair and makeup.  Eventually, the lovely assassin collapsed on the bed face first.  Like Fifi before her, she was able to exclaim before she expired, "Damn you.....damn you all to hell!"

Superseven and Sandra noticed that Elke also had a tattoo on the right shoulder.  Like Fifi, she had "Live", but she also had "& Let Die!" next to it.

Valda explained to Miss West that he was on his way there to fulfill his contract on her.  He continued that "unfortunately for me, and fortunately for you, I received a phone call from Sue Muru.  She decided to cancel the contract.  I was just down the hall, when Elke entered the room, so I took care of her."  He then pointed his index finger at Seven and said, "You owe me, Sue Muru rarely changes her mind."

Sandra got a little dizzy, and decided to lie down next to Elke's corpse.  While Seven and Valdo were talking, Sandra decided to take off Elke's left stiletto,  He then grabbed Seven's car keys and rushed out of the room.  Seven chased after her, leaving Valdo alone in the room with Elke's body.

After the credits, they showed Valdo walk over and pick up Sandra West's gun that was sitting on the TV cabinet.  Suddenly, a computerized voice said "property of Sandra West", and Valdo began to be electrocuted.  Valdo ended up collapsing on the bed, with his head lying on Elke's rear end. 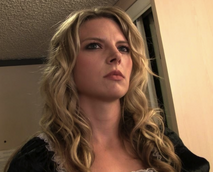 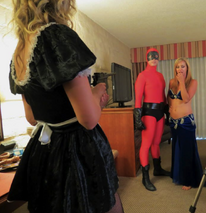 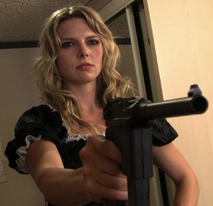 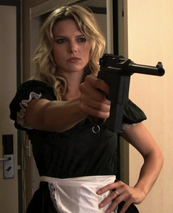 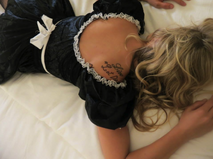 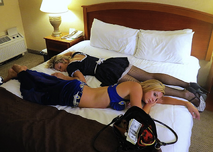 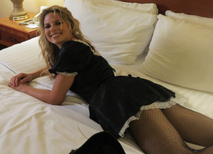 Add a photo to this gallery
Retrieved from "https://femalevillains.fandom.com/wiki/Elke_Kleinschmidt_(The_Adventures_of_Superseven)?oldid=150357"
Community content is available under CC-BY-SA unless otherwise noted.