Elizia (Hildegard Neil) is the mistress-governor of Entra, a planet-prison for males, ruled entirely by Women.  She appears in the 1977 episode "Devil's Planet" for the TV series "Space: 1999".

Entra, is a prison for political dissidents sent from the other world, Ellna. The prison is run entirely by women and the inmates are all male. As the huntress-guards carry Koenig, the hero (Martin Landeau), to their headquarters, a trial is underway there in a large hall. A prisoner stands accused of plotting an uprising against the ruling authority. Beside him stands Crael (Roy Marsden), a senior prisoner, pleading his case to Elizia, mistress-governor of this penal colony. But this is simply a kangaroo court, and she declares the accused to be guilty. The proceedings are interrupted by the senior guard, Sares (Cassandra Harris), who reports on the capture of Koenig. She presents Koenig's stun gun to Elizia, who uses it to stun the defendant. He is then sentenced to 'The Hunt'. Crael denounces 'The Hunt' as inhuman, as few survive. Elizia decrees that any prisoner offered the chance to outwit the Hunters and reach the 'Sanctuary Column'—winning instant parole and a return to Ellna—will accept the challenge.

Elizia goes to observe Koenig's interrogation by her Head of Security. Using a mind-probe, she discovers Koenig knows about the plague on Ellna—a secret known only to herself and Elizia. Elizia has withheld all knowledge of the disaster from both prisoners and guards in order to maintain the status-quo on Entra. She orders the information removed from Koenig's brain, regardless of any brain damage this may cause.

She then rejoins Crael to grant an early parole to another inmate. After the transbeamer conveys the man home (and to his death), Crael questions why the government has stopped sending new prisoners to Entra. The inmates are also unhappy with the recent rules banning live contact with Ellna, but Elizia responds with plausible lies. When he criticises her cruel policies, a guard lashes him for impertinence. Elizia smirks, stating he is lucky he amuses her.

The Interrogator informs Elizia the alien anatomy of Koenig's brain is preventing her from erasing their secret. The Interrogator discusses the growing unrest among the prisoners and advises telling the truth about the plague. Elizia refuses, knowing the inmates would become ungovernable. The Interrogator predicts Koenig will tell them but Elizia is confident no one will believe him.

Koenig awakens in a cell with three Entran prisoners. As expected, he soon reveals his knowledge of the mass death on Ellna. The convicts wonder if this is the truth or another of Elizia's mind games. Just then, the 'weekly news' from Ellna is played over the public adress system. Fabricated by Elizia, this broadcast is the only mode of information available to the prisoners. As an announcer recounts false news of friends and family, the angry prisoners attack Koenig for lying but he is saved by the guards.

Elizia openly ogles Koenig like a male sex object. She invites him to stay with her and experience "undreamed-of pleasure"...until she tires of him. After Koenig refuses her crass offer, they are interrupted by the arrival of Eagle Two in orbit. Koenig is held in a sound-proof force-field as Elizia contacts the ship. She attempts to warn them off, but pilots Fraser (John Hug) and Alibe (Alibe Parsons) are determined to rescue their Alphan colleagues. To deter them, Elizia lies, saying both men were killed in the crash. Despite the threat of the force field, Fraser declares he will come in shooting, if necessary, in order to recover the bodies. Elizia craftily changes tactics, granting permission to land. She directs Crael to lead a work-party to the clearing near the crash site. By the time the Alphans arrive, all they will find is evidence of two deaths. While Koenig's footprints are swept away, another inmate, Phirly, dons Koenig's uniform. He is instructed to leave a trail, walk up to the deactivated energy fence, and strip. Phirly does as he is told, but Elizia reactivates the fence early, vaporising him so that she can make it appear that Koenig died there.

Koenig watches from his cell window as Eagle Two touches down. Elizia greets the Alphan party and they proceed to the crash site. Elizia feigns sympathy as she relates her version of the tragedy—the two men, having survived the crash, blundered into a boundary fence before help could arrive. Fraser and Alibe are shown the staged footprints and two piles of charred Alphan uniforms. The grieving Alphans then depart, much to Elizia's satisfaction.

Koenig is brought to the reception hall where an enticingly-gowned Elizia awaits. A hunter at heart, she finds the thrill of seduction in the chase as well as the conquest. In the face of his defiance, she reminds him that his people believe him dead. Remaining alive depends on how much he entertains her. Koenig seems to capitulate, taking her in his arms and kissing her—then sends her tumbling into her personal guards before escaping into the forest outside.

Elizia instructs her guards that as Koenig has shown contempt for their culture and authority, he must die slowly when captured. While the guards begin tracking him, Koenig comes across the wreckage of Eagle One and attempts to contact Alpha. Elizia smirks; while no transmission can penetrate the defence shield, it has pinpointed his location. As Elizia and company board the ship, he salvages a homing transmitter and a fire exringuisher before jumping down the command-module escape hatch. Three guards soon overtake him, but Koenig incapacitates them with the extinguisher. As he activates the transmitter, Sares grabs him, boasting their shield is blocking his signal. Koenig escapes her and, with this new information, he changes tactics and heads back to the prison tower. Koenig enters the hall and, before anyone can prevent him, darts into the transbeam booth. Elizia raises a weapon, threatening to disintegrate him. Koenig cagily reminds everyone that if she shoots, she destroys the transbeamer—and their only means of returning home. The Interrogator reminds Elizia that, with no hope of parole, the prisoners will revolt. Crael addresses Koenig regarding his claim of a plague-ravaged Ellna. Koenig tells them Elizia has known about it all along and has been lying to them all. A verbal battle of wits ensues, with Koenig and Elizia each challenging the other's veracity. Upon engaging the transbeamer, Koenig issues her a final challenge to follow him herself and bring him back alive.

On Ellna, Koenig activates the homing device, which is received by Eagle Two. On Entra, Elizia faces defeat. The Interrogator will no longer support her lies and the guards' loyalty is broken. She transports herself to Ellna, emboldened by the fact that she will at least kill Koenig before her own death, but she dies within moments of arriving. Eagle Two arrives and Koenig is rescued. 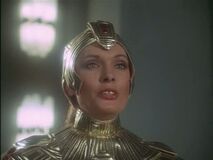 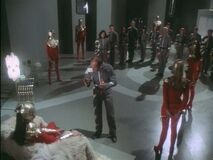 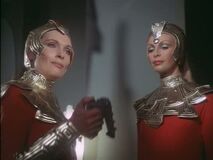 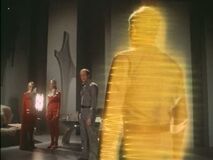 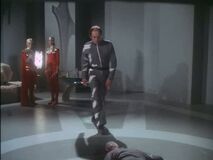 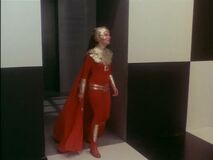 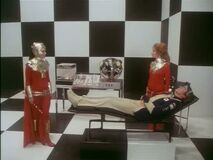 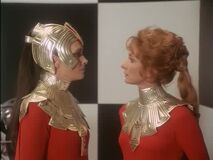 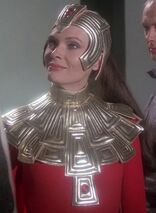 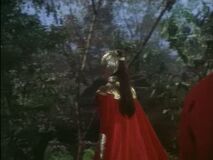 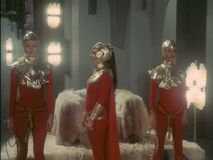 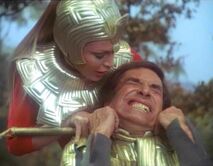 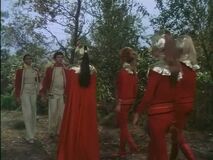 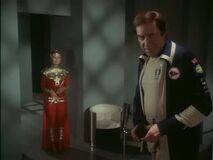 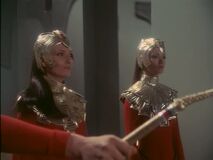 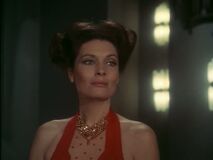 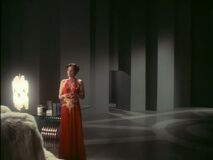 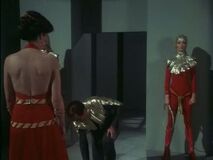 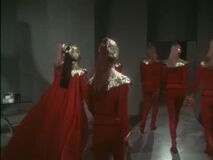 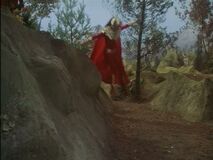 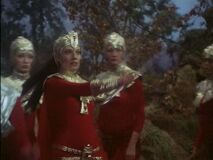 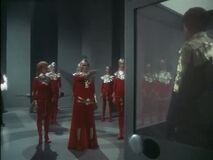 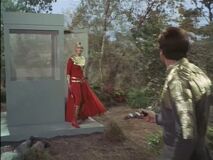 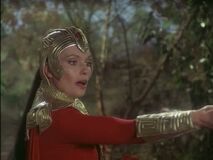 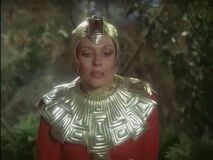 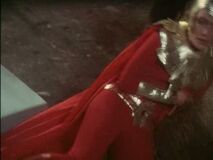 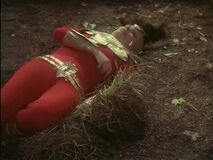 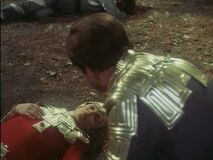 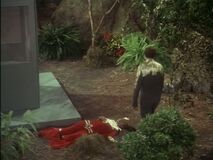 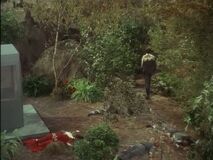 Add a photo to this gallery
Retrieved from "https://femalevillains.fandom.com/wiki/Elizia_(Space:_1999)?oldid=165050"
Community content is available under CC-BY-SA unless otherwise noted.