Start a Wiki
watch 01:51
The Loop (TV)
Do you like this video?
Elizabeth Rodriguez (Jamie Luner) was the main villainess from "Lying Down with Dogs," episode 8.10 of CSI (airdate December 13, 2007). She was a wealthy philanthropist and the wife of Felix Rodriguez.

However, Elizabeth's philanthropic work and overall geniality is a cover for her true evil persona as a participant in dog fighting. As revealed later on, Elizabeth was the #1 dog fighter in the state, and she had help in her cruel business from her partner, Steve Card--while it was also revealed that she learned about the business from her wealthy father. As shown in flashbacks, the evil Elizabeth used a rub on the dogs owned by her opponents (one of them being gang member Gino Aquino), doing so to make the dogs sick. She was also shown preparing her dogs by feeding a smaller canine to a bigger one, all while flashing a sick and twisted smile on her face.

Tommy Halpert, a teen volunteer who worked at a kennel financed by the Rodriguez couple, was enlisted by a DA to investigate Elizabeth's evil activities. Despite sending evidence, nothing was really done, so Tommy decided to take matters in his own hands. After Elizabeth received an award for her philanthropic work, she returned to the kennel to prepare the dogs, and it was there that the villainess was killed by Tommy. She was tied down and euthanized, and later fed to the kennel's dogs. 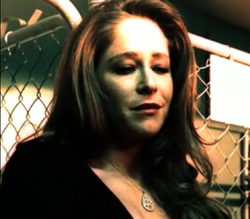 Elizabeth's deceased body
Add a photo to this gallery
Retrieved from "https://femalevillains.fandom.com/wiki/Elizabeth_Rodriguez_(CSI)?oldid=196231"
Community content is available under CC-BY-SA unless otherwise noted.