Elizabeth aka Liz (Pandie Suicide) was the villainess from Blood Bath, a short horror film from Crypt TV (release date March 20, 2018). The film began with Elizabeth (who at this point, is an elderly woman) awakening from bed and marking off the day on the calendar, revealing that there would be a full moon that night.

Afterwards, Elizabeth revealed her villainous intentions as she dragged a man (who she had wrapped up in a garbage bag) into her kitchen. After cutting the bag open, the man began to scream out for Elizabeth, not realizing the woman before him was Elizabeth in her true form. As the man continued to scream out, the evil Elizabeth knocked him out with a wooden hammer, later dismembering his body and grinding it into blood.

After that, Elizabeth filled a bathtub outside with the blood of her victim, which she proceeded to get into after stripping naked. The elderly woman then submerged herself in the blood and emerged from the bath younger and with dark brunette hair, revealing that Elizabeth was using human blood in a ritual to keep herself young and beautiful. Now in her desired form, Elizabeth got onto a dating app and set up a date with Marv, relishing at having a new victim at her bay. Elizabeth met Marv at a bar and the two eventually went to Elizabeth's house to have sex. But in the film's conclusion, Marv was shown emerging from Elizabeth's blood-filled bathtub as a younger man, revealing that he had the same powers as Elizabeth and had killed her to fulfill the twisted ritual on himself. 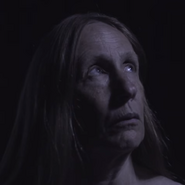 Elizabeth in her elderly form, preparing to perform her ritual

Elizabeth's karmic fate
Add a photo to this gallery

Retrieved from "https://femalevillains.fandom.com/wiki/Elizabeth_(Bloodbath)?oldid=92622"
Community content is available under CC-BY-SA unless otherwise noted.