Start a Wiki
watch 01:51
The Loop (TV)
Do you like this video?
Eliza Rheinberg aka Eliza Fairfax is the villainess of "Get Off Your High Horse", case #40 of Criminal Case: Mysteries of the Past (release date August 24, 2017). She was initially introduced as the princess of "Splichtenstein" and was questioned by the player and Isaac Bontemps at the Ascroft horse race in regards to murdered jockey Anna Jewell.

Eliza initially claimed that she hardly knew Anna, but it was later revealed that she had placed a large bet on Anna winning a race that she ended up losing. Ultimately, the case's climax would reveal a deeper secret of Eliza's: she was actually a poor girl who originally worked as a market flower girl and who was childhood friends with Anna. Eventually, Eliza's dreams of making something more of herself led her to take lessons on being a "lady", adopting her false persona as a princess.

But sometime prior to the events of the case, Eliza re-encountered Anna at a soiree being held by Lady Highmore, with Anna recognizing her old friend and later talking about Eliza's true identity after getting drunk. Not wanting her secret revealed, Eliza took Anna to the stables to talk to her, but once there, the evil Eliza eventually lost her temper and bludgeoned Anna to death with a stirrup.

Feathers from Eliza's hat were discovered by Viola Pemberton, with this and other clues leading to Eliza's reveal as Anna's killer. After initially proclaiming innocence, Eliza eventually came clean and revealed herself as both an imposter and murderer (dropping her faked accent in the process). Eliza also went on to confess to her impoverished past and friendship with Anna, and how she'd killed Anna to prevent her lie from being exposed. Eliza was arrested and put on trial, where she tried to argue to Judge Justin Lawson that "Eliza Rheinberg" had killed Anna and that all she'd wanted to do was to move herself up in the world. Eliza was ultimately sentenced to eighteen years in prison. 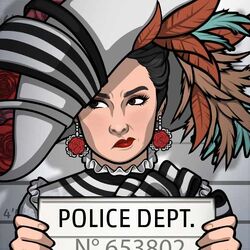 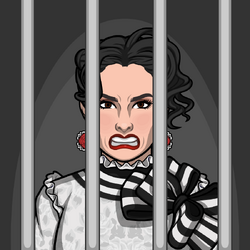 Add a photo to this gallery
Retrieved from "https://femalevillains.fandom.com/wiki/Eliza_Rheinberg_(Criminal_Case)?oldid=187037"
Community content is available under CC-BY-SA unless otherwise noted.