The Female Villains Wiki
Register
Don't have an account?
Sign In
Advertisement
in: 2010s, Bare-Handed, Behind Every Great Man,
and 23 more

Elise Simon (Michelle Borth) is the hidden main villainess from the 2018 Lifetime film, Devious Nanny (originally released and titled The Au Pair in 2017; alternately titled Nanny Betrayal; airdate March 2, 2018). She is the wife of Brian Simon and the mother of their son, Cody.

The couple's backstory revealed that Brian had cheated on Elise with Becky Hopkins, who worked as the family's nanny before the film's events. Despite Brian's affair, Elise stayed with Brian and portrayed the role of a forgiving wife, but in actuality, Elise turned heel and murdered Becky in her apartment, committing the murder in the beginning of the film. The scorned villainess poisoned and drugged Becky and scattered a bottle of pills to make it appear that she committed suicide.

Elise and Brian hired a new au pair, Amber Deschanel, with Elise signing off on the hiring after Brian scored a huge account at his workplace. However, Brian's friend and co-worker, Vance Lipton, was given the sole credit and the go-ahead to take the lead on the account, and later on, Elise set up Vance to meet her at a nearby motel in a plan to kill him. She donned a pink wig, a scantily clad dress, and high heels as she appeared to Vance at the door, where she stabbed him to death. Elise later went after George Dutros, who had been approaching her at her art gallery; continuously attempting to buy the gallery for his own land developments. She trashed the gallery and set him up as the culprit, and later stabbed Dutros to death at an isolated area.

Brian was suspected in both murders by the detectives on the case; all the while, Elise attempted to set up Amber as the killer, with the tattoo on her person during Vance's murder being part of her evil plan. After informing Brian that she had a feeling about Amber, Elise followed Amber to the home of her friend Jax, and returned there the next day. She learned that Amber lied about her family background to get hired; after which Elise left through the front door. However, the evil Elise returned through the back door of the house and killed Jax, and later on, she engaged in a confrontation with Amber, where she accused Amber of killing Vance and Dutros. The confrontation became physical, and Elise beat Amber in a brutal fistfight and climbed on her and began strangling her. Brian entered in the nick of time and Amber escaped.

Six months later, Brian found Amber's charm bracelet while gardening, and it was at that moment that Elise appeared and flashed a sinister smirk, revealing herself as the true villainess. She boldly confessed to the murders, stating that she took Brian back to keep their family together, while seeing Vance as a threat. Elise also stated that Dutros got what he deserved, and that while she did take Brian back, she killed Becky because she couldn't let his affair go, adding that she enjoyed killing her husband's mistress. She claimed that she did feel sorry for killing Jax, but even so, Elise gave Brian a choice: go to the police and break up their family, or cover for her. Brian took the latter, giving the bracelet to police but not giving up Elise.

However, the couple received a flash drive in the mail, which revealed a video from Amber where she stated that she had suspected Elise's murderous actions. She switched the nanny cam with a recorder, and also stated that neighbors had spotted Elise in her hooded disguise leaving Jax's home. Amber had sent the file to police, and the film ended with the police heading to the Simon house, under the assumption that Elise was arrested (off-screen) for the murders. 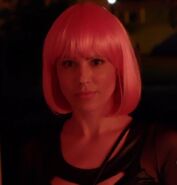 Elise in her wig while approaching Vance 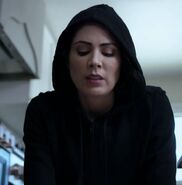 Elise in her hooded disguise while killing Becky 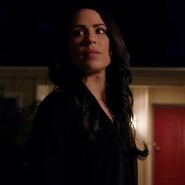