Elise (Lauren Holly) is the main villainess of the 2015 film After The Ball. She is the scheming, manipulative head of a fashion company owned and set up by her husband Lee Kassell and his deceased ex-wife. Having gained control of the company, Elise installed her two daughters Tannis and Simone as designers, despite their ideas being commercially unsuccessful.

When Lee's other daughter Kate, a talented designer, takes up his offer of a job with the family company, Elise plots to make Kate's life as difficult as possible. Kate is handed over to Tannis and Simone, who give Kate menial jobs and even steal designs Kate has come up with, presenting these as their own to Lee.

With Tannis and Simone's assistance, Kate is then set up to make it look like she has leaked designs to a rival company. With Elise providing evidence to prove Kate's guilt, Lee has no other option but to fire his daughter, much to Elise's satisfaction.

Kate then returns to the company disguised as a male designer, proving to be a great success. Meanwhile, Elise is secretly plotting again to leave the company, and is finally discovered by Lee.

From the outset, Elise exudes an authority and dominance within the company, and uses her daughters to great effect to strengthen her position. Upon deciding that Kate needs to be forced out, she sets Tannis and Simone to work, and Kate is powerless to prevent her dismissal.

Elise also succeeds in controlling and manipulating Lee, and it is only at the end of the movie when her husband sees her as the evil, manipulative woman that she is.

While she is eventually found out, Elise still manages to use cunning, underhand ways to maintain her grip on the company, with Tannis and Simone effectively her footsoldiers to carry out her evil plans.

Elise is impeccably presented throughout the movie, wearing business suits that are quite revealing and with flawlessly prepared hair and make-up. One of her key physical features though are her long, blue fingernails, sharpened to points and shown off in her opening scene as she drags them along a tabletop. 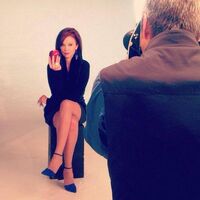 Add a photo to this gallery
Retrieved from "https://femalevillains.fandom.com/wiki/Elise_(After_The_Ball)?oldid=87289"
Community content is available under CC-BY-SA unless otherwise noted.