Eleanora (Annabella Incontrera) appears in The Assassination Bureau, a 1969 British comedy-melodrama set in London and Europe around 1900 as the world moves to what would become the First World War.

The Assassination Bureau is an organization of professional hitmen from around Europe. The Bureau is led Ivan Dragomiloff (Oliver Reed) who is the son of the Russian founder of the group.

Before the founding of the Bureau, assassinations were a very hit and miss affair. They were often poorly planned and most of the time they failed. The Assassination Bureau was created as a sort of precursor to Murder*, Inc. The Bureau murders people for money. The fact that they have no connection to the crimes that they commit makes it difficult for the authorities to connect them to the murders. Their murders are well planned and untraceable.

* (Murder, Incorporated a was real organized crime group in the 1930s and '40 that killed people for money.)

Dragomiloff has working for him a number of trained assassins from each of the major countries of Europe.

The guiding principle of his bureau from the time of its founding was that there had to be a moral reason why their victims should be killed – these have included despots and tyrants.

Sonia Winter (Diana Rigg) is an aspiring journalist and women’s rights campaigner who has stumbled upon the secret organization.

Sonia lets it be known that she wants someone killed and that she has the funds needed as payment. She is taken to the secret headquarters of the Assassination Bureau where the board members are conducting a meeting at a large round table. Dragomiloff is presiding over the meeting.

Sonia, is allowed to make her case before the group. She tells the men that she wants to take a contract out on Dragomiloff himself.

Instead of being upset by the proposal Dragomiloff accepts it as a challenge and tells the other members of the group that he is now fair game. (Dragomiloff is really using this contract on his life as an opportunity to get rid of some of his rivals within the Bureau, who are secretly after him anyway.)

More recently Dragomiloff has noticed that his elder colleagues have tended to kill more for financial gain than for moral reasons. Dragomiloff, therefore, decides to accept the commission of his own death and challenge the other board members: Kill him or he will kill them!

As soon as Dragomiloff accepts the contract on his own life the Italian board member Cesare Spado (Clive Revill) attempts to kill Dragomiloff by throwing a dagger. Dragomiloff ducks and knocks out Spado with his gavel.

It soon becomes apparent that Lord Bostwick (Telly Savalas) the newspaper owner for whom Sonia works wants to take control of The Assassination Bureau. It was Lord Bostwick that gave Sonia the money to pay for Dragomiloff’s murder.

Lord Bostwich and his sidekick the Prussian General von Pinck (Curd Jürgens) watch in the shadows as a number of board members make attempts on Dragomiloff’s life, but fail and are themselves killed.

Dragomiloff ends up teaming up with Sonia who slowly falls in love with him. The pair travel to Italian city of Venice. The home of the knife-throwing Cesare Spado and his wife Eleanora Spado.

Eleanora is said to be an even better assassin than her husband. Dragomiloff compares her to the historic femme fatale Lucrezia Borgia.

We are first introduced to Eleanora (Annabella Incontrera) she is having dinner with her husband who is greedily wolfing down a dessert. The dessert is poisoned, and he dies. Eleanora is having an affair with a tall handsom gondola man, Angelo (Jess Conrad).

Angelo man takes the body of Cesare Spado wraps it in a canvas blanket tide with rocks and rope and then rows it out to the middle of one of Venice’s many canals and rolls the body over the side. He then begins singing while Eleanora listens impassionedly from her window to his beautiful voice.

Eleanora has her lover the gondola man dispose of the body. Once again he rows the body out to the middle of the canal but is killed by Dragomiloff.

Eleanora makes several more attempts on Dragomiloff and Sonia and finely convinces Lord Bostwich, General von Pinck, and herself that she has succeeded.

Elanora pours some wine to toast their future working as a team and General von Pinck draws his gun and shoots her dead. 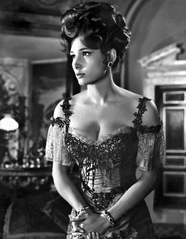 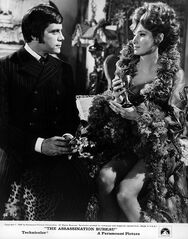 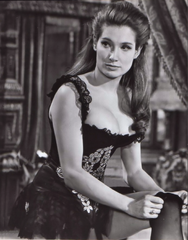 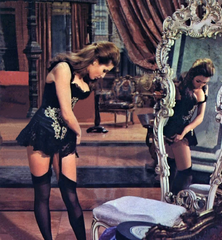 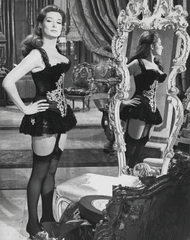 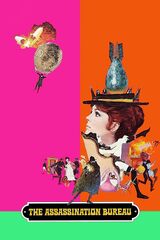 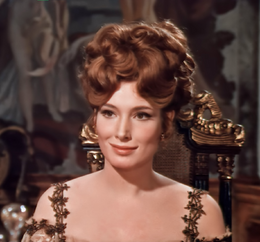 As her assassin husband dies, Eleanora feigns concern while getting info about the Assassination Bureau 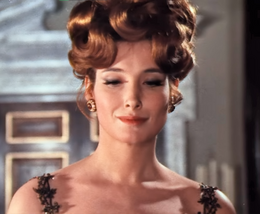 Satisfaction as she watches her husband finally die 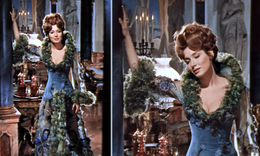 Surprised by visit from benevolent master assassin Dragomiloff who instantly suspects Eleanora of killing her husband (his colleague). He decides to use her for his own ends. 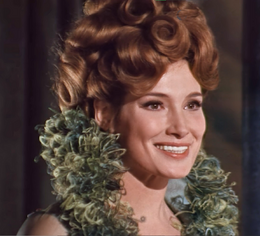 Eleanora's evil delight as she is presented with opportunity to kill Dragomiloff to collect bounty and get access to Assassination Bureau.

Attempts to seduce Dragomiloff but fails 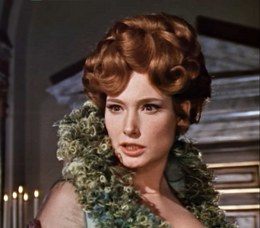 Incensed as she is spurned and accused of murder

Dragomiloff playfully spins the table with the poisoned wine glass and suggests Eleanora drink 1st (just to screw with her). He then pretends to drink and seemingly dies.

Thinking she's killed Dragomiloff, Eleanora is ready to to join the Assassination Bureau and dresses for success

Admires herself in the mirror 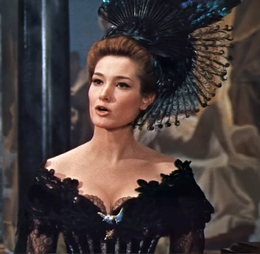 Eleanora orders her lover around

Arrogantly applies to be a member of Assassination Bureau

Sonia escapes out of sight. The Bureau suspects Dragomiloff is still alive and helped her. Eleanora realizes that Dragomiloff used her, and her failure to kill him is about to be exposed

Lord Bostwich scolds Eleanora as he threatens to open Dragomiloff's coffin. He brushes her aside as he passes.

A humiliated Eleanora returns with a new devious plan...

Self satisfied as she believes the blackmail is successful

Her plan backfires as Assassination Bureau deems her expendable

Eleanora reacts as the gun goes off
Add a photo to this gallery
Retrieved from "https://femalevillains.fandom.com/wiki/Eleanora_Spado_(The_Assassination_Bureau)?oldid=215367"
Community content is available under CC-BY-SA unless otherwise noted.