Start a Wiki
watch 01:50
The Loop (TV)
Do you like this video?
Elaine Goodwin (Claire Rankin) is the main villainess of "Gun for Hire", episode 5.04 of Republic of Doyle (airdate October 23, 2013). She was the head of a computer security company who was shown meeting with Sergeant Leslie Bennett regarding her being placed on the U.S. No-Fly List, with Elaine claiming she was only in Newfoundland for three days for a business conference.

But in actuality, Elaine's trip to Newfoundland was to purchase "yellow cake", a chemical that was used to make nuclear weaponry. Elaine bought the shipment from undercover special ops agent Callum Pardy, later hiring Vinnie Walsh and Martin Poole to kill Pardy in order to avoid having to pay him for the materials. Elaine's reveal as a villainous terrorist when Des Courtney infiltrated her hotel room and eavesdropped on a phone conversation Leslie was having, trying to get a way out of town.

After uncovering Elaine's villainous deeds, Leslie and Callum confronted Elaine in her hotel room as she was preparing to leave with the yellow cake. Rather than surrender, Elaine revealed that she'd rigged the suitcase to blow up if she dropped it before forcing Leslie to disarm herself. Elaine then tried to run, only to be stopped by Jake and Malachy Doyle. Elaine ran again, losing the suitcase as she ran through a suitcase cart, before taking Leslie hostage, ordering the Doyles and Callum to retrieve her materials if they wanted her back alive. With the suitcase having been stolen by Martin, Jake and Callum went to meet Elaine at a marine repair company with a suitcase of sand, as Elaine had paid the company to help her escape.

During the standoff, however, Martin arrived with the real yellow cake, exposing the attempted deception. Enraged, the evil Elaine forced Jake to scan the explosives to make sure they were real before preparing to make off with it and Leslie, telling the group that their actions changed their deal before opening fire on them. But as Elaine forced Leslie to grab the suitcase of yellow cake, Jake used Martin's gun to shoot down a pile of pipes from a ladder, distracting Elaine and allowing Leslie to strike her with the suitcase, allowing for Jake to free Leslie and for Callum to take Elaine into custody when the police arrived. 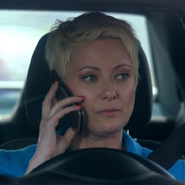 Elaine giving her demands to Jake 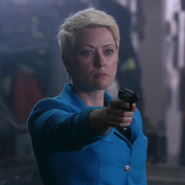 Add a photo to this gallery
Retrieved from "https://femalevillains.fandom.com/wiki/Elaine_Goodwin_(Republic_of_Doyle)?oldid=151973"
Community content is available under CC-BY-SA unless otherwise noted.