Start a Wiki
watch 01:24
The Loop (TV)
Do you like this video?
Elaine (Janyse Jaud) was the main villainess from "Full Moon Fascination," the 10th episode of Cybersix (airdate October 28, 2000).

Elaine was a villainous female werewolf, and she was shown in her monstrous form watching as an unknown man turned into a werewolf. The villainess reveled in her ability to turn people into werewolves, revealing that she had attacked and turned her victim, who, in turn, attacked Lucas Amato. Meanwhile, Elaine appeared at Lucas' school and introduced herself as a fellow teacher, leading to the pair becoming smitten.

After sensing Cybersix's presence in Lucas' home, Elaine transformed into her heel persona and engaged in her first battle with Cybersix, only to escape to avoid being spotted. Meanwhile, Lucas turns into a werewolf on the following night, drawing Cybersix's attention. Elaine spots Cybersix and fights her again, and after Lucas arrives, the villainess ordered Lucas to help her destroy Cybersix, with Lucas giving in and fighting against his friend. Cybersix made various attempts to get through to Lucas, and it was during this point that Cybersix figured out that the female werewolf was none other than Elaine.

Seeing her stranglehold begin to slip, the evil Elaine attempted to kill Cybersix herself, only for Lucas to attack the villainess and stop her. With Lucas hanging for dear life and Elaine attempting to send him falling, Cybersix sent a swinging hook towards Elaine, knocking her off and sending her falling to her death. Elaine shifted back into her human form and stated that Von Reichter (the series' main antagonist) sent her to take out Cybersix--her last words before dying. 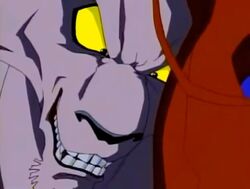 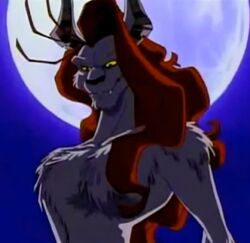 Retrieved from "https://femalevillains.fandom.com/wiki/Elaine_(Cybersix)?oldid=118952"
Community content is available under CC-BY-SA unless otherwise noted.