Effie Stokes was a member of a religious sect known as the Penitites, and for a long period of time, she had harbored romantic feelings for the sect's leader, Reverend Josiah Grange. She had longed to become Josiah's wife, not only for love, but also for power, as she would already be powerful enough as a reverend's wife, but she could become reverend herself in the event of Josiah's death. At some point before the events, Effie gained possession of the titular Quilt of Hathor, which allows the owner the ability to kill others in their dreams, with the victims experiencing the dreams as their own nightmares and dying for real.

Effie's first victim was Jane Spring, who had become Josiah's selected wife shortly before the episode's events. It was in the beginning of the episode that Effie had her dream, which saw her at a lavish event dancing with Josiah, with Jane cutting in. After Josiah and Jane head towards a balcony, Effie ordered Josiah to kill Jane, which he does by shoving her over the railing and sending her falling to her death, with Jane experiencing that same death for real in her sleep. Ryan Dallion and Micki Foster went to the sect after their aunt, Sarah Good, informed them about the quilt; meanwhile, Effie had figured that she would become Josiah's wife after Jane's death, only to become disappointed when Josiah selected a woman named Rebecca Lamb. Effie used the quilt to kill Rebecca later on, as the dream had the villainess drugging Rebecca's drink, with Rebecca succumbing to the effects.

When Sarah suspected Effie of possessing the cursed quilt, the evil Effie planned to eliminate Sarah as well, and with the quilt's power, the deranged villainess struck Sarah with a candelabra and set her on fire. Sarah, who was experiencing the same nightmare, knocked over a candelabra and ended up killed in the fire. Micki confronted Effie and later took the quilt, with Effie protesting and calling Micki a thief. However, the episode ended with the reveal that the quilt that Micki took was a phony, and it was revealed as such by Jack Marshak, as he set it on fire as a test. The quilt burned, proving that it was a fake, as the real quilt can't be destroyed.

The following episode began with Effie clutching the real quilt, showing pride in tricking Micki with the phony. She overheard Ryan (who opted to stay at the sect due to his affection for Laura, Josiah's daughter) informing Elder Florence about Effie and the quilt, leading to Florence becoming Effie's next victim. After laying down with the quilt, Effie's dream saw her wielding a fork and plunging it into Florence's eyes, causing Florence's eyes to be gouged out in the real world. She set up Ryan in Florence's death, which gained Josiah's attention. Josiah dismissed Ryan's statements about Effie and the quilt, but later on, Josiah announced that he had taken Effie as his wife, which pleased the villainess.

However, becoming Josiah's wife was the first step in Effie's goal, as she later planned to kill Josiah to become reverend. She manipulated Josiah into laying under the quilt with her, and in her dream, Effie wielded a knife and planned to kill her new husband. At that moment, Josiah--having figured out the quilt's powers--turned the tables on Effie, turning her dream into his own and Effie's nightmare, which ended with Josiah killing his wicked wife by breaking her back. Josiah woke up to see that the quilt's powers had worked, as Effie was laying deceased in their bed. 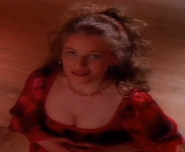 Effie Stokes, as she appears in her dreams

Retrieved from "https://femalevillains.fandom.com/wiki/Effie_Stokes_(Friday_the_13th:_The_Series)?oldid=110606"
Community content is available under CC-BY-SA unless otherwise noted.