Edith (Kari Wahlgren) is a villainess from "The Norse Case Scenario", episode 1.25 of Be Cool, Scooby Doo! (airdate June 20, 2017). She and her husband, Donald, first encountered the Scooby Gang as they were on a camping excursion, during which they began to investigate claims of viking ghost sightings, and the couple claimed to be bird watchers.

But in actuality, Edith and Donald were illegal loggers who had paid off forest ranger Mark to let them log in his forest. But when a team of archaeologists began working in the area, the evil Edith worked alongside Donald and Mark to dress as viking ghosts to scare them (along with any other tourists) away and keep their illicit business from being discovered.

Edith and her conspirators were eventually caught after falling into a trap set by Fred Jones. During her summation of the gang's crimes, Daphne Blake revealed two big pieces of evidence pointing to the trio's guilt: the gang discovering a large flock of birds Edith and Donald claimed weren't present in the forest, and the archaeologist group's excavation permit (which Mark had tried to throw away to prevent them from continuing their work). Following the summation, Edith and her male cohorts were placed under arrest.

Edith in disguise alongside Donald and Mark 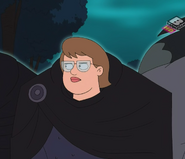 Edith unmasked as a villainess
Add a photo to this gallery
Retrieved from "https://femalevillains.fandom.com/wiki/Edith_(Be_Cool,_Scooby_Doo!)?oldid=200775"
Community content is available under CC-BY-SA unless otherwise noted.