Edie Reynolds was introduced in Mannix as the wife of reporter Lou Reynolds, as well as the mother of their young daughter, Tina Reynolds. However, Edie would abandon her husband and daughter and attempt an acting career, and when she returned, she tried to go back to Lou, only for Lou to file for divorce.

As revealed in the Diagnosis Murder sequel, Edie was also having an affair with George Fallon, who hired Mannix on a case that same episode. As part of the divorce proceedings, Lou planned to file for sole custody of Tina, which dismayed Edie immensely. Edie turned heel and planned to murder her husband, and she did so after tracking Lou and Tina to a nearby zoo. Using a hunting rifle, the evil Edie killed Lou with a single shot, with Tina witnessing the murder but not knowing (at the time) that her mother was the killer.

For over 20 years, Lou's murder was fingered as a mob killing, and regarding Edie, she married Fallon following the events of Mannix. The Diagnosis Murder sequel featured Mannix back on the Lou Reynolds case due to incriminating tapes connected to the case being taken. and after learning about Mannix, Edie reverted to her heel persona and fired a shot at Mannix as he was leaving the Hall of Records. Edie's motive was to conceal her villainous role in Lou's death, and she fired the same rifle she used to kill her husband. When Mannix first encounters Edie in the sequel, he learns that she is married to Fallon, and had been for 20 years after the affair began.

Edie was finally revealed as a villainess in the end of the episode, as Mannix confronted Edie at home with the evidence that she killed Lou. It was Edie using the rifle in the murder and the attempt on Mannix that gave her away, and regarding her motive, Tina (now a reporter herself) was her sole reason. Edie confessed to killing Lou, stating that he was going to have her declared as an unfit mother and she would lose Tina. After the admission, Steve Sloan arrested Edie for killing her husband and attempting to kill Mannix. 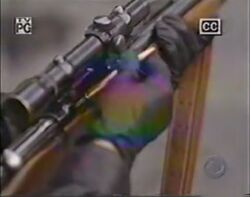 From Diagnosis Murder: the evil Edie loading her weapon
Add a photo to this gallery
Retrieved from "https://femalevillains.fandom.com/wiki/Edie_Reynolds_Fallon_(Mannix_%26_Diagnosis_Murder)?oldid=142618"
Community content is available under CC-BY-SA unless otherwise noted.