Start a Wiki
watch 01:51
The Loop (TV)
Do you like this video?
Edie Landers (Diane Ladd) was the main villainess from the 1994 TV film, Hush Little Baby.

35 years prior to the film's events, Edie Landers attempted to drown her infant daughter, Pearl, in the bathtub--leading to Edie being arrested and charged with child endangerment. Edie has been placed under the care of a psychiatrist, but she had been relentlessly searching for Pearl, who had since been given up for adoption and renamed Susan. Susan had since married Dr. Martin Nolan, and she had served as the stepmother for Martin's son, Dylan, and had a baby son of her own with Martin, named Petey.

Edie is shown contacting a private investigator regarding Susan, after she has successfully discovered her whereabouts. She reunited with Susan later on, and after spending the day together, Susan invites Edie over to her home to meet her family, including her adoptive parents. Within moments, Edie begins her twisted plan to have Susan all to herself; beginning with killing Susan's adoptive mother, Pearl, with an overdose of insulin. Her next victim was Meg, the family's housekeeper, and she started with sabotaging her work efforts. Edie placed Petey alone in the garage, and once Susan rescued him, Meg was accused of neglect. Meg wasn't let go from her job, prompting Edie to kill her; doing so after luring her away from the home.

When a policeman called regarding Meg's disappearance, Edie deceptively states that Meg ran off with her boyfriend to Mexico; a claim that Dylan denies. With Dylan having figured out Edie's true personality, the twisted villainess terrorized him as well; framing him for stealing money and continuously taunting him. Edie also made seductive passes at Martin, first doing so while brushing her hair, and then posing seductively while playing with Martin's razor; both times wearing only a robe. Martin had already wanted Edie to move out, and her psychotic action furthered his case to Susan, who angrily lashes out at her husband and defends Edie. As a result, Martin left the house with Dylan, and Edie smiles as her plan has apparently worked, as it was just her and Susan.

Edie's bliss was halted when she realized that Petey was still a presence in the home, and after Susan tended to a crying Petey, Edie snarled at her daughter to put Petey down. Now seeing Petey as an obstacle, Edie planned to eliminate him. She was drawing a bath for the infant when Officer Andrews returned to the home after Martin's attempts to call the home were not answered. Edie let Andrews in, only to kill him with a knife to his back. Edie went back to her plan to drown Petey, only for Susan to enter and recall her ongoing memory of Edie attempting drown her years ago. Susan took the baby from her twisted mother and attempted to escape, but was caught by Edie, who smashed the car window with an axe after screaming at her. Edie resurfaced with Petey at the balcony, where she was encountered by Susan, and ranted about how everyone, including Petey, was taking Susan away from her. She threatened to toss Petey over the balcony, only for Susan to snatch him away from her. After stating repeatedly that she "can't go back," Edie jumped over the balcony to her death. 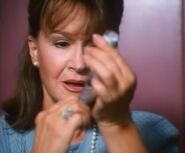 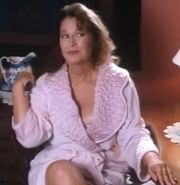 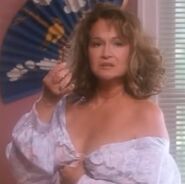 Add a photo to this gallery
Retrieved from "https://femalevillains.fandom.com/wiki/Edie_Landers_(Hush_Little_Baby)?oldid=184086"
Community content is available under CC-BY-SA unless otherwise noted.