Dyne Wiseman (ダイン・ワイズマン) is a secondary antagonist in the 1998 sci-fi crime visual novel game Luv Wave (ラヴ・ウェーブ) by C's Ware, as well as the 2000 OVA of the same title by Pink Pineapple.

In the anime[edit | edit source]

Dyne is the president of Digital Demand Corporation who backs the story's villains who are known as the Shadows. Before this, she was both assistant and mistress to the leader of the Shadows, Dr. Wezmar. She orchestrates murders for him and he rewards her perverted requests to indulge in a kinky virtual reality program. Together, they develop a virus called XINN which has the capability of taking over every security network on the planet, thus giving oneself the power of a god.

The hero of the story, Mikogami Kaoru, manages to track Dyne down one night and interrogate her, with the help of a dangerous illegal drug called "Ninth Heaven". Dyne finally begins to divulge information about her and Wezmar's goals, but before she can finish, she is shot dead by Kaoru's partner Alice; an android who is infected with XINN. 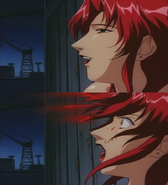 In the game[edit | edit source]

Add a photo to this gallery
Retrieved from "https://femalevillains.fandom.com/wiki/Dyne_Wiseman_(Luv_Wave)?oldid=100756"
Community content is available under CC-BY-SA unless otherwise noted.