Start a Wiki
watch 01:48
The Loop (TV)
Do you like this video?
Dusty (Jordana Brewster) was a villainess from the 2015 film Home Sweet Hell. She was a recently hired employee at the furniture store owned by Don Champagne, with Don forming an intense attraction to the flirtatious Dusty due to his troubled marriage to his wife, Mona.

Don's temptation for Dusty led the two to start a passionate affair, and it was during a party at the Champagne house that Dusty dropped a bombshell to Don: she was pregnant with his child. Don later attempted to pay Dusty off by giving her $13,000, only for Dusty to become offended by Don's offer and tearfully proclaimed that it wouldn't be enough to cover her medical expenses. The two eventually made an agreement that Don would pay Dusty $20,000 so she could raise her baby on her own.

Soon after, however, Dusty was revealed as a deceitful and greedy blackmailer, as she was not only revealed to be lying about her pregnancy, she was the girlfriend of criminal Murphy and a conspirator in his plot to extort money from Don. Dusty made her reveal when she went to the trailer where she and Murphy lived with his cohorts Freeman and Benji, with the evil Dusty explaining that she had failed to get the money from Don due to his wife being in control of their finances. Dusty assured the frustrated Murphy that she would get the money, with the villainess later calling Don and arranging to meet him at the store for the pay-off, threatening to expose their affair to Mona if he didn't pay her. Unbeknownst to Dusty, Don had already told Mona and she was listening in on the call, having instructed Don to kill Dusty in order to put an end to her extortion.

During the meeting at the furniture store, Don asked Dusty what had attracted her to him, with Dusty claiming she'd actually like Don and wanted him to have all the happiness in the world. Shortly afterwards, Dusty downed the drink Don poured for her as a toast, and began to grow drowsy due to the drink being laced with medication Don put in the drink. Don comforted Dusty as she attempted in vain to escape, with the villainess revealing she was trying to get away from Murphy and his cohorts using the money she was trying to blackmail from Don before passing out. Dusty suddenly awoke after Don and Mona drove back to their house, with Mona eventually finishing her off by bludgeoning her with a hammer. 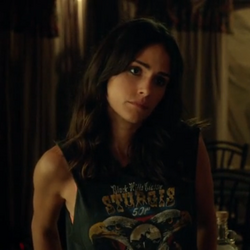 Dusty during her villainous reveal 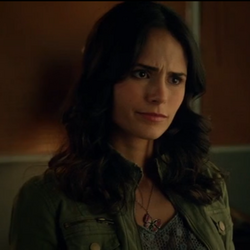 Add a photo to this gallery
Retrieved from "https://femalevillains.fandom.com/wiki/Dusty_(Home_Sweet_Hell)?oldid=169787"
Community content is available under CC-BY-SA unless otherwise noted.