Drosera is an evil witch who is the antagonist of the 2017 hidden object video game Lost Grimoires 2: Shard of Mystery.

The game is set in a fantasy kingdom that had been attacked by a powerful and vile witch named Drosera. After a long and hard battle against Drosera and her army, the king overpowered the witch and banished her away to another dimension through a magical Chasm Mirror portal. Upon the king’s death, the protagonist sorceress Violet was entrusted the responsibility for his young son, Prince Fern.

Over the next twelve years Violet helped prepare Fern for his future as king while also bestowing her own knowledge of magic upon him. But the night before Prince Fern is scheduled for his coronation, Fern is tricked by his secret romantic interest, a mysterious young girl named Rose, who encourages him to show her the mirror in its secret hiding place. Once at the mirror, Rose, who was really her adoptive daughter, inserts a shard of glass that makes Drosera regain her powers to break free.

The witch kidnaps Fern into the other dimension and prepares her great return to wreak havoc on the kingdom. Now Violet must her track down Drosera before the kingdom is destroyed, free the prince, and help him put an end to the witch once and for all. They are also aided by Rose, who swore to make Drusera "pay for her lies and betrayal", and indeed shows up for the final battle. 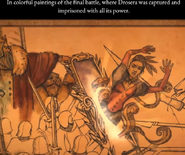 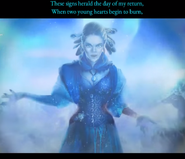 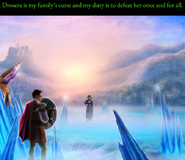 Add a photo to this gallery
Retrieved from "https://femalevillains.fandom.com/wiki/Drosera_(Lost_Grimoires_2:_Shard_of_Mystery)?oldid=183557"
Community content is available under CC-BY-SA unless otherwise noted.