Start a Wiki
watch 01:48
The Loop (TV)
Do you like this video?
Draculaura (Saoirse Ronan) is the main villainess of I Know What the Braz did Last Summer, a segment from "Catdog on a Stick", episode 7.10 of Robot Chicken (airdate June 15, 2014). She was a Monster High doll that began killing off the Bratz dolls, a year following them killing Barbie by striking her with their car.

Donning a purple coat and hat as a disguise, Draculaura's first victim was Cloe, breaking into her bathroom and disposing of the medication she took for her encephalitis (which she and her friends gave themselves to make their heads larger). After taunting Cloe about stealing her medicine, Cloe's head blew up, with Draculaura expressing glee at her first kill. Draculaura then attacked Jade and extracted the fat from her lips, and was surprised that Jade looked better afterwards. Despite that, a despondent Jade committed suicide by jumping through a nearby window.

Draculaura then killed Sasha by simply shooting her in the head after she answered the door to her, noting to the audience that she'd "run out of ideas". Draculaura's final victim was Yasmin, who she struck with her car as Yasmin came to believe that Barbie was still alive and had come back to get revenge on the Bratz. After getting out of the car, Draculaura unmasked herself and boasted that Monster High had killed Bratz in the same way they killed Barbie, laughing after remarking that it was "poetic justice". Draculaura then informed Yasmin that Barbie's corpse was at a different mile marker before preparing to finish off her victim. But before she could, Yasmin offered herself sexually to Draculaura, with the segment ending under the assumption that Draculaura took Yasmin up on the offer; leaving it ambiguous as to whether or not she killed Yasmin afterwards. 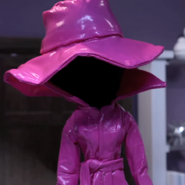 Draculaura's villainous disguise
Add a photo to this gallery

Retrieved from "https://femalevillains.fandom.com/wiki/Draculaura_(Robot_Chicken)?oldid=174781"
Community content is available under CC-BY-SA unless otherwise noted.