Tory Appleton is the only child of prominent Cleveland doctor Sheppard Appleton and his wife, Susan. By the age of 14, Tory was raped repeatedly by her father, who was never charged for his incestuous actions. All the while, Susan turned a blind eye to Sheppard's actions, wanting to keep the illusion of the perfect family alive. One night in 1988, an enraged Tory shot and killed Sheppard while he was watching TV, firing two shots at his chest. She later shot her mother in the abdomen, and fired another five shots at her, killing her as well. The murders were depicted as a home invasion, with Tory hiding in the closet and appearing to have survived the killings.

Tory became pregnant as a result of her father raping her, giving birth to a son named Jack Roberts, who went into foster care. In the time that passed, Tory changed her name to Victoria Nolan and also became a serial killer, and it was revealed that after finding five-year-old Jack, she taught him how to kill a puppy. Eleven years later in 1999, Nolan murdered four more people, doing so while attending medical school and reading about murders committed by notorious serial killer Charles Hoyt.

Nolan became a forensic psychologist and wrote a book on serial killers, and in the beginning of the episode, she appeared to Jane Rizzoli and Maura Isles at the former's home regarding their appearance at a symposium, with Jack posing as her research assistant. The event included a reenactment of a scene where two people were killed, only to find out that the bodies were real, as Nolan and Jack had murdered them. The victims were Jane Ferguson and Kent Williams, both crime lab techs. Another victim of the killers was Chuck Fletcher, a detective originally from Pittsburgh who BPD originally suspected in murdering the lab techs. All the while, Nolan continued masking her malevolent personality, and was shown in Vince Korsak's home feeding his dogs, Starsky and Hutch.

The episode's climax featured Nolan's reveal, as well as Jack's, as she closed her laptop after video of her interview with Hoyt was played--and both of them were shown with a tied-up Korsak. Everything in Nolan's past was revealed:  being raped by her father, and her past serial killings, as well as Jack being her son and a product of incest. As for why Korsak was targeted, the evil Nolan stated that he is an average guy and part of the system, claiming that he would do nothing if a girl in her situation came to him. The demented villainess also revealed how she raised Jack to be a killer, and how both of them enjoy what they do, right before ordering Jack to work on Korsak. Korsak attempted to get through to Jack by asking him why he lets his mother boss him around, which eventually led to Jack snapping at Nolan. Nolan shot Jack, and later blamed Korsak for what she did. At that moment, Jane arrived and shot Nolan (non-fatally), while Barry Frost ordered her not to move. Both mother and son were arrested, but not before Nolan coldly told Jane to let her son die while he was being checked on, stating that she reminded him of Sheppard. 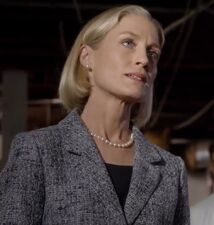 Add a photo to this gallery
Retrieved from "https://femalevillains.fandom.com/wiki/Dr._Victoria_Nolan_(Rizzoli_%26_Isles)?oldid=147632"
Community content is available under CC-BY-SA unless otherwise noted.