She is a psychiatrist who was married to Republican politician Jake Simon and is also the mother of teenager Lizzy Simon. Veronica's public image as a happy wife and mother masked her true persona: an ambitious villainess who was unhappy in her marriage, mainly due to Jake always being preoccupied with matters relating to his career. Eventually, Veronica turned heel by plotting to have her husband murdered in a manner that could not easily be traced back to her so that she could first become a New Orleans Councilwoman and then one of the two U.S. Senators for the state of Louisiana.

Veronica began her plan by gazing at Victor Bernard (who would later become the movie's secondary antagonist) at an art exhibit that took place in New Orleans' Warehouse District; both Jake and Lizzy had gone with her to the exhibit as well since it was part of her husband's campaign to become a Louisiana Senator. She admired a sculpture that he had created that included a video image of his deceased mother, which led to a friendly conversation between the two. Their chat ended when Rebecca, a woman involved in the exhibit, had to introduce the young sculptor to a few other people.

Veronica then saw an opportunity to get closer to Victor when Jake went away for a weekend political trip and also dropped off Lizzy at the home of her friend Ellie. She decided to acquire Victor's sculpture, and after he loaded his creation into her car, the pair went to a restaurant and bonded over their life experiences. Victor then took Veronica to a bar, and as she danced, he began to make out with her, which culminated with the two having sex in Victor's bedroom. The next morning, Veronica woke up to her lover taking pictures of her using a Polaroid camera. Veronica allowed him to continue taking pictures under the condition that she would be allowed to burn them afterwards, and shortly after, the two had another tryst, and continued kissing as Veronica burned Victor's Polaroids of her.

The next day, Veronica began driving back to her home after first visiting her father. As Jake spoke with his wife on the phone while she was driving it was then revealed Governor Wallace was giving his full support to his campaign. However, when an anonymous person began to call her, Veronica initially thought that it was one of her patients, with both her and her husband agreeing to end their conversation. The voice revealed Victor as being the second caller, with him asking for Veronica to come to his art studio in the heart of New Orleans. The scheming villainess then decided to prank him, resulting in a brief argument between the two that ended when they proceeded to make out. After this, Victor tried to have a candlelit dinner with Veronica, only for her to eventually reveal that she wanted to end their affair, much to Victor's dismay; he had fallen in love with her by then.

Victor reacts by stalking her and her family. Veronica attacks Victor at his home and tells him to leave her and her family alone, but Victor continues stalking them. He even starts a relationship with Lizzy and also befriends Jake. Veronica follows the two on a hunting trip and stops Victor's attempt to kill Jake, while also coming clean about her infidelity. Things come to a head when Victor kidnaps Lizzy and takes her to the docks. When Veronica and Jake arrive, Victor shoots and kills Jake. The sculptor then attacks Veronica before being shot by Lizzy.

Veronica's villainous reveal comes near the end of the film when she visits the imprisoned Victor, who reveals that Veronica had come to him to kill Jake for her. Veronica coldly denies the accusation, telling Victor that he is delusional and needs to take his medications before abruptly ending the call, causing Victor to scream after her. During TV interviews about the ordeal, the evil Veronica denies having an affair with Victor and claims that he was simply delusional. 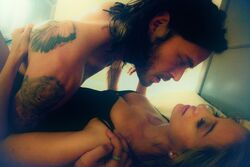 Veronica having sex with Victor 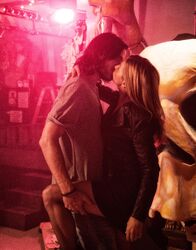 Veronica and Victor passionately kissing in his art studio
Add a photo to this gallery
Retrieved from "https://femalevillains.fandom.com/wiki/Dr._Veronica_Simon_(Indiscretion)?oldid=169838"
Community content is available under CC-BY-SA unless otherwise noted.