To seduce wealthy men and kill them to obtain their wealth

Dr. Theodora "Teddy" Rowe, aka Dixie Collins (Katee Sackhoff and Rose McGowan) was a recurring villainess from the final two seasons of Nip/Tuck.

Dr. Theodora Rowe (nicknamed "Teddy" for short) was introduced in episode 5.19, "Manny Skerritt," and was interviewed by Sean McNamara for the anesthesiologist position. She was hired due to her qualifications (along with the fact that Sean was attracted to her immensely provocative personality) and she filled the void left by Liz Cruz. In the process, Teddy also became Sean's girlfriend.

Unbeknownst to Sean, Teddy was an evil "Black Widow"; a seductive villainess who marries (usually rich) men and later kills them. Teddy's villainous actions were revealed in the season finale, "Giselle Blaylock & Legend Chandler," when she was shown as a redhead going under the name, Dixie Collins, in a Las Vegas plastic surgery firm. She had married the owner, Dr. Harlan Frank, and was shown engaging in a wild sexual act with him in an operating room. At one point, Teddy convinced Harlan to use the anesthetics as part of their tryst, but it was really an opportunity for the villainess to kill Harlan, which she does when she presses the oxygen mask down on his face.

Teddy set her sights on Sean in the beginning of Season Six, and it was on the season opener, "Don Hoberman," that they became engaged after Sean proposed to Teddy. The couple actually split up after the engagement, but in the beginning of episode 6.03, "Briggitte Reinholt," Sean announced that he and Teddy eloped. During that same episode, Teddy encountered the titular Briggitte Reinholt, a patient who was using leeches in her procedure. Briggitte recognized Teddy as Dixie, and needing to keep her murderous past hidden, Teddy planned to kill her. After ditching her collection of wigs, the femme fatale put on a wig and a face mold and added more leeches to Briggitte's person, which resulted in the patient bleeding to death.

Meanwhile, Teddy had manipulated Sean into doubling his insurance policy and putting Connor and Annie on it as well, doing so in the following episode, "Jenny Juggs." She also coerced Sean to take her and the kids on a camping trip, and once there, the evil Teddy orchestrated her plan to kill them; drugging the smores with sleeping pills and flooding the camper with carbon monoxide. However, Annie did not consume the drugged smores and managed to save Sean and Connor from Teddy's attempt. Meanwhile, Teddy (believing that she had been successful in her plan) walked off and encountered a male camper, who happened to be a serial killer who targets women. Teddy ran to Sean's camper, only to find it empty, and she was later killed and decapitated by the murderer. 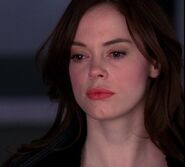 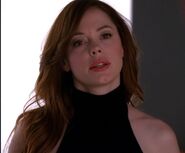 Teddy in her disguise as she murders Briggitte Reinholt
Add a photo to this gallery
Retrieved from "https://femalevillains.fandom.com/wiki/Dr._Theodora_%22Teddy%22_Rowe_(Nip/Tuck)?oldid=196347"
Community content is available under CC-BY-SA unless otherwise noted.