Start a Wiki
watch 01:51
The Loop (TV)
Do you like this video?
Dr Susan Hiller (Joan Fontaine) is a secondary antagonist in the 1961 fantasy sci-fi adventure movie Voyage to the Bottom of the Sea.

Ostensibly she is an observer studying the signs of stress among the crew of the super-futuristic and atomic-powered submarine the USS Seaview, Brainchild of Admiral Harriman Nelson (Walter Pidgeon).  Later when the sub is sent on a Earth saving mission to extinguish deadly radiation fires which are ravaging the Earth's upper atmosphere in the Van Allen belt. It is revealed that Hiller is a saboteur and spy for a foreign power, and she tries to kill the admiral.

Hiller is killed by a shark after falling into the water in the Seaview's loading bay after a struggle with Admiral Nelson. 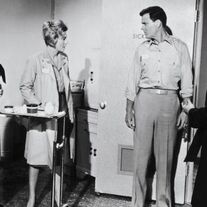 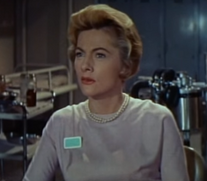 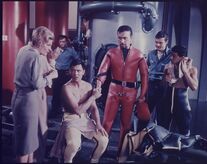 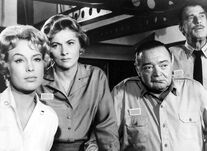 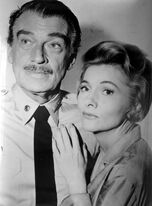 Add a photo to this gallery
Retrieved from "https://femalevillains.fandom.com/wiki/Dr._Susan_Hiller_(Voyage_to_the_Bottom_of_the_Sea)?oldid=138034"
Community content is available under CC-BY-SA unless otherwise noted.