Start a Wiki
watch 01:48
The Loop (TV)
Do you like this video?
Dr. Susan Harris  (Anitra Ford) is the main antagonist of the 1973 sci-fi horror film "Invasion of the Bee Girls".

Both scientist and entomologist, Dr. Harris discovers a way to merge the genes of bees with that of humans. Using abducted women, she does just that, creating a small army of human females who behave like queen bees. It is never quite explained what she hopes to achieve by doing this, other than personal curiosity or fun. The women seduce and bed several male scientists, killing them in the process.

These incidents are finally put to an end by hero Neil Agar, who manages to destroy the machinery used to transform the women. Left trapped inside the room, Harris and her minions perish.

Susan seems charming on the surface...

...but there's a secret behind those shades.

Smirking as another newcomer is about to be transformed...

...and then, lead heroine Julie Zorn.

Neil shows up in the nick of time, however... 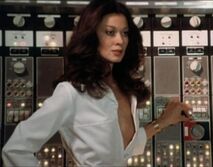 ...and the mad scientist is toast.

Retrieved from "https://femalevillains.fandom.com/wiki/Dr._Susan_Harris_(Invasion_of_the_Bee_Girls)?oldid=174248"
Community content is available under CC-BY-SA unless otherwise noted.