Start a Wiki
watch 14:21
The Loop (TV)
Do you like this video?
Dr. Larkin is a cruel and ruthless (neo-fascist) politician trying to be elected mayor of a crime struck metropolis by all means necessary. She is the main antagonist and criminal mastermind in the martial arts movie Mission of Justice.  She loves to torture her opponents and has some martial arts fighting skills herself. She is portrayed by an ice-cold Brigitte Nielsen.

Her plan to take over the city is finally thwarted by the good guys, two martial arts cops (Kurt Harris and his female partner, Lynn Steele) who expose Dr. Larkin’s torture practices (caught on video) after an endless series of kung-fu fighting. As it becomes clear to the would-be mayor that a prison cell is waiting for her, she tries to fight her way through but is (rather easily) taken down by Kurt. Since he wants to take revenge on her for the murder of one of his friends, he is about to kill the defeated villainess with her own weapon (some sort of kung-fu knife [please help with a more precise word]) but is eventually convinced by Lynn not to throw away his life. Kurt refrains from killing his defenseless opponent, grabs the handcuffs Lynn is stretching out to him and does his duty by arresting the evil Dr. Larkin.

Dr. Larkin has (lots of) henchmen and at least one henchwoman (Erin Miller, an evil scientist and torture expert played by Cyndi Pass) at her service. During one of the climactic battles just before Dr. Larkin’s downfall, Erin is defeated by Lynn (Karen Shepard), Kurt’s partner, cuffed to a chair and left for the police to be picked up.

As other critics have already noticed, there are some (perhaps even many) inconsistencies throughout this martial arts spectacle, e.g., Nielsen’s coiffure changes from one scene to the other (from long to short and back – cf. www.comeuppancereviews.com/2011/05/mission-of-justice-1992.html). At the final battle during Larkin’s election day party, even her nail polish changes suddenly from colorless to red.

As one critic pointed out (see link above), there seems to be a symbolic meaning connected to Dr. Larkin’s hairstyle, “long” meaning the good-girl-façade, and “short” pointing to her true villainous self. A comparable interpretation is possible if we have a close look at her hands: no (or colorless) nail polish = ‘good’ politician; gloved hands or visible red nail polish = ‘evil babe’. With this interpretation in mind, it is (symbolically) consistent to have Kurt arrest a short-haired Dr. Larkin who (suddenly) sports red nail polish. 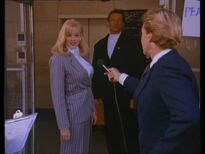 Long hair means "trust me, I'm not like the other politicians!" 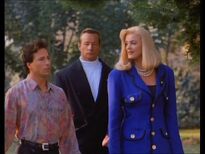 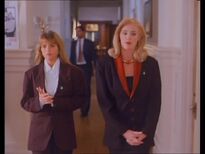 Rachel with her henchwoman, Erin Miller 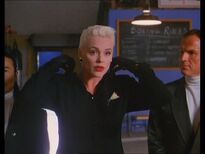 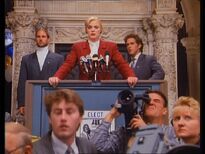 Still triumphant (just before her downfall) 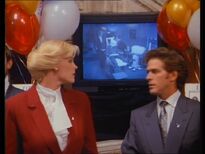 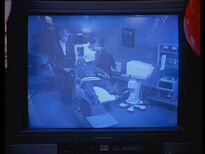 Rachel and Erin caught in the act (of torturing an opponent) 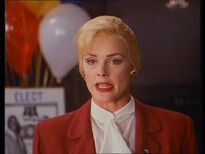 Being told by Kurt that "it's over" 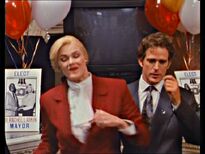 A furious Rachel punishing one of her incompetent henchmen 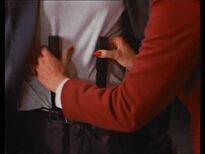 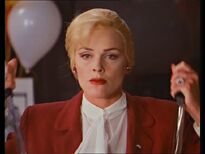 Ready to fight her way through 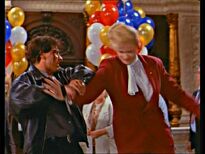 ...but she stands no chance against Kurt, the kung-fu cop 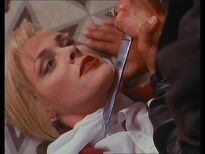 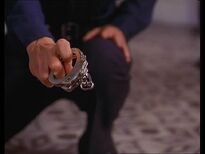 Lynn convincing her partner not to kill the villainess 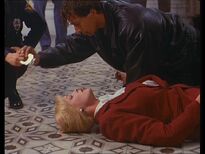 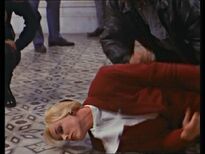 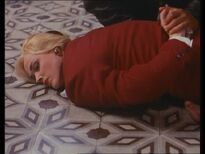 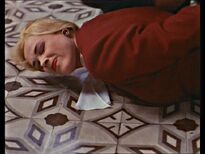 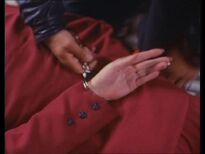 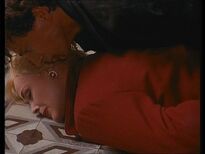 "Did you understand your rights"?

Add a photo to this gallery
Retrieved from "https://femalevillains.fandom.com/wiki/Dr._Rachel_K._Larkin_(Mission_of_Justice)?oldid=146957"
Community content is available under CC-BY-SA unless otherwise noted.