Dr. Levine appears to be a kind and genial doctor at a charity clinic for runaways, but in actuality, she is a Geier--a vulture like creature who harvests the organs of her patients for profit. Levine's villainous reveal came when Nick and Hank tracked down a group of Geiers who kidnapped Levine's latest attempted victims, and their findings led to a warehouse where Levine is revealed to be the ringleader. In the episode's climax, Levine woges into her Geier form and engages in combat with Nick, who evacuated the warehouse. The battle ends with Levine falling to her death in a pit of fire. 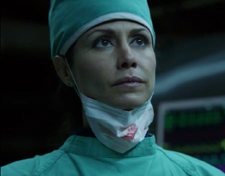 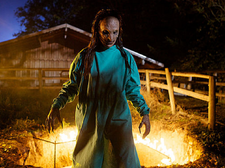 The evil Levine in her Geier form
Add a photo to this gallery
Retrieved from "https://femalevillains.fandom.com/wiki/Dr._Levine_(Grimm)?oldid=152744"
Community content is available under CC-BY-SA unless otherwise noted.