Start a Wiki
watch 04:10
The Loop (TV)
Do you like this video?
Dr. Leary (Teri Polo) is the hidden main villainess from the 2018 Lifetime film, Deadly Delusion (alternately titled, The Lease; airdate January 13, 2018). She is the therapist to Julie McNeil, the film's main protagonist, and she was shown talking with Julie while she was on a flight with her husband, Shane.

However, Dr. Leary is also the villainous mastermind behind a snuff film operation, where the filmmakers hide cameras in their victims' homes and kill them off on video--all for monetary gain. The villainess set Julia up with Shane (who is an actor with a history of doing performances like this), and sent them to a home operated by Robert Turner and his cohort Arthur. As part of the ruse, the evil Leary continuously responds to Julia's (true) claims of being watched by telling her that it was all in her mind.

The roles of the conspirators were revealed in the film's climax, with Julia killing not only her original intended murderer, but Shane as well. In the end of the film, Dr. Leary is shown with another patient, Heather, and she releases him with a man claiming to be an old friend of hers. The final scene shows Dr. Leary smiling evilly after Heather walks away, officially marking Leary's villainous reveal. 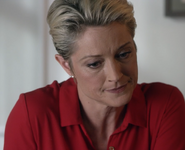 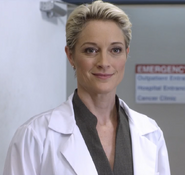 Dr. Leary's evil smile; confirming her role as a villainess
Add a photo to this gallery
Retrieved from "https://femalevillains.fandom.com/wiki/Dr._Leary_(Deadly_Delusion)?oldid=174556"
Community content is available under CC-BY-SA unless otherwise noted.