The Female Villains Wiki
Register
Don't have an account?
Sign In
in: 2010s, Ambitious, Bondage Used On Villainess,
and 25 more

Lane first appeared in the series' second episode, "Independence Day", as she was out hunting with Head of Surgery Randolph Bell and Congressman Trip Dunlop, who accidentally shot his intern (non-fatally) while collapsing. Later on, Lane saw leukemia patient Lily Kendall and—despite the consternations of Dr. Nicollette "Nic" Nevin—discharged her early from the hospital.

In episode 1.04, "Identity Crisis", Nic asked Lane for Lily's chart, as she was worried about her, with the latter promising to give it to her. The prolonged wait forced Nic to head to one of Lane's clinics, where she noticed a number of patients receiving high amounts of chemotherapy treatments. Upon learning about Nic being at the clinic in question, the sociopathic woman began her gradual heel turn by banning her from treating Lily and any of her other patients in episode 1.05, "None the Wiser". The following episode, "No Matter the Cost", saw Lane inform Lily that she was cleared for a bone marrow transplant. However, Dr. Devon Pradesh unveiled that Lily's kidneys were failing, meaning the transplant would kill her. The plan was stopped, with Lane appearing to express regret for her near mistake.

Episode 1.09, "Lost Love", began with Lily wanting a second opinion, as she had suffered an adverse reaction to the chemotherapy. Nic made the referral for the second opinion, with Lane learning about this later on, prompting the latter to allow the former to take care of Lily once again. Near the end of the episode, Lane instructed Nic to administer a large amount of potassium to Kendall, as she was allegedly on her way out. She did what was instructed, making sure the potassium entered slowly before leaving. After Nic's departure, however, Lane was shown entering Lily's room, as she had lied to her about leaving. Her villainous reveal was cemented when she murdered Lily by tampering with the setting of the potassium and intentionally causing her to die of a potassium overdose.

Nic and Dr. Conrad Hawkins (the latter of whom unsuccessfully attempted to save Lily's life) believed that Lane's overuse of chemotherapy killed Lily, but it was in episode 1.11, "And the Nurses Get Screwed", that the actual cause of death was unearthed. Nic and Lane were both interviewed about the crime, with the villainess throwing the former under the bus to cover her tracks. Additionally, the evil and callous deceiver seduced Randolph into having a relationship with her before convincing him to get Claire Thorpe fired as Chastain Park's CEO, resulting in the latter taking her place. Bell also went on to fire Nic, further playing into his girlfriend's nefarious schemes.

Nic continued her investigation into Lane in episode 1.12, "Rude Awakenings and the Raptor", leading to the reveal of Lane's backstory during a meeting with her former protégé, Dr. Anthony Ewen. As he recounted, his ex-mentor ran a clinic in Nashville (doing so under her previous married name, Lane Derzius) while she guided him, but during his time there, she was overdosing patients with large amounts of chemotherapy as part of an insurance scheme meant to monetarily benefit herself, with one of them dying due to her actions. Anthony did not ask questions then, but when Lane was doing the same at clinic in Atlanta, which resulted in another death, he confronted her. In response, the villainess ruined Ewen's career before moving on to Chastain Park. When Lane discovered that Nic was asking Allie Palmer (Lane's assistant) for her files, she set up the Hunter Cancer Center to appear that it had been broken into, resulting in Nic's arrest during the season's penultimate episode, "Run, Doctor, Run".

The season 1 finale, "Total Eclipse of the Heart", had Devon learning of something even more shocking: Olivia Tan, a hypochondriac and frequent patient, was diagnosed with lymphoma by Lane, who gave Olivia her first chemotherapy treatment. Tan herself disclosed this information, and as it clearly turned out, she had no signs of cancer whatsoever. After Devon informed Conrad and Nic of his discovery, the three of them went to Randolph with their findings, with Nic revealing that patients of Lane's have contracted cancer due to the chemotherapy, suggesting that Lily was one of the many that this happened to. Moreover, it also meant that Kendall's second opinion would have uncovered the truth, so Lane orchestrated Lily's demise in order to keep her evil secrets hidden.

Armed with that information, Randolph went to Lane and supposedly warned her that the FBI was acquiring a warrant to search the Hunter Cancer Center for the aforementioned files, which gave her time to gather said files so she could burn them. In the episode's climax, Lane went to get the files, only to find FBI agents waiting for her when she was leaving. She was handcuffed and taken into custody, with her reacting to seeing Randolph at the scene being to display anger towards him for setting her up.

It was revealed through news reports shown in the season 2 opener, "00:42:30", that Lane faced 1 charge of murder along with 12 charges of insurance fraud and money laundering. As her trial continued, she remained imprisoned before returning as a minor villainess in the season's eighth episode, "Heart in a Box", which had her threatening to release a video of her in bed with Randolph at Atlanta's Four Seasons Hotel and paint him as her seducer in spite of the opposite being what started their relationship. Her demands were that he paid the remaining $500,000 of her bail (set at $5,000,000) and obtain a top-notch lawyer for her.

After he reluctantly acquiesced, she was freed from prison and became the main villainess of episode 2.10, "After the Fall". Her release outraged her living victims and their families; several of them (along with dozens of others) protested. One such victim, Natalie Brown, became a Chastain Park patient after falling and injuring herself at a protest, culminating in the discovery that Lane's unscrupulous treatment weakened her bones to the point she had to walk with a cane and indirectly gave the ex-cop a spinal cord compression that would paralyze her. She eventually agreed to have it repaired with a surgery; in due time, Natalie would be able to walk without a cane once again.

All the while, Lane paid a visit to her former workplace and personally approached Bell with the intention of continuing to blackmail her ex-boyfriend. This time, though, the conniving and fiendish criminal ordered him to testify in her favor unless he wanted her to go into detail about his past shady deeds (including his arrest in episode 2.02, "The Prince and the Pauper", for soliciting an undercover female police officer who reminded him of her) and medical errors to Chastain Park's board of directors. Believing he was cornered, Randolph drafted a resignation email to the board, only to delete it after receiving unexpected news: Lane was dead. Natalie's husband Roger Stanley avenged his late sister—who fatally succumbed to Lane's excessive chemotherapy—and his wife by knocking on the door to the villainess' hotel room and then firing a gun three times through said door just as she looked through its peephole and leaving her to bleed to death. 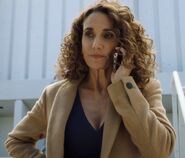 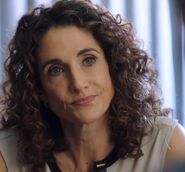 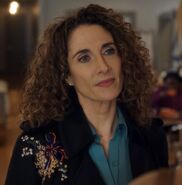 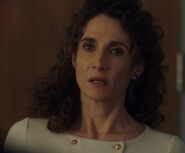 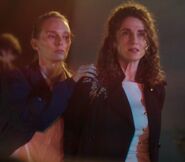 Lane being arrested by the FBI
Community content is available under CC-BY-SA unless otherwise noted.