Start a Wiki
watch 04:10
The Loop (TV)
Do you like this video?
Dr. Jennifer Grier (Suzanne Cryer) is the main villainess from "Freaks & Geeks," episode 12.06 of CSI (airdate November 2, 2011). She is a zoologist and the sister of the episode's murder victim, Rachel Grier.

As revealed in Jennifer's first appearance, she and Rachel had a strained relationship, with Jennifer (with daughter Sylvia present) claiming that she hadn't seen Rachel in years. Rachel was found with various needles in her arms, but was part of her carnival act and persona as the "Magnificent Femmistopheles:  Empress of Pain." Her actual cause of death was an overdose of propofol, and CSI's encounter with the carnival's leader, Major Willie, led to them suspecting him of killing Rachel.

Willie was cleared when no propofol was found at the carnival, and he was later found dead of an apparent suicide by hanging. Though Sylvia was suspected, it turned out that Willie's killer was Seth Helm, aka Sergio the Strong, who believed Willie killed Rachel and killed him out of anger for being forced to move Rachel's body, making Willie's death look like a suicide. He later coughed up a bottle of propofol as part of his belief that Willie killed Rachel, but the bottle ended up revealing Jennifer as Rachel's true killer.

As revealed in Catherine Willows' interrogation, Jennifer harbored jealousy of Rachel, as Sylvia looked up to her more than her mother. She stated that Sylvia saw Rachel as an adventurer and a free spirit, while she herself described Rachel as a fantasy and a freak. Rachel wanted to return to her sister and niece's lives, and despite Sylvia's adoration for her aunt, Jennifer believed that Rachel was a bad influence and planned to kill her. The villainess walked into the carrnival and saw Rachel with the needles in her arm, and at that moment, the evil Jennifer injected her sister with a lethal dose of propofol, which caused Rachel to suffocate to death. Jennifer defended her cruel actions by stating that Rachel used Sylvia to get to her, and stated that she killed her sister to protect Sylvia. Jennifer was later arrested (off-screen) for killing her sister. 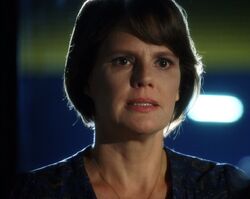 Jennifer Grier's reveal and interrogation
Add a photo to this gallery
Retrieved from "https://femalevillains.fandom.com/wiki/Dr._Jennifer_Grier_(CSI)?oldid=134525"
Community content is available under CC-BY-SA unless otherwise noted.