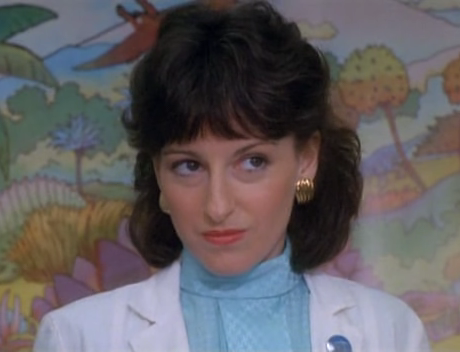 Dr. Jainway (Ann Marie Lee) is a corporate underling and the sole female villain in the 1989 horror film "The Fly II".

Dr. Jainway is one of the scientists working under the film's main villain Anton Bartok, at his company Bartok Industries. At the start of the film, Stathis Borans watches in horror as his lover Veronica Quaife struggles to give birth to a child that she and Seth Brundle (the protagonist and "Fly" of the first film) had conceived before his death. Jainway has Borans removed, and Veronica dies during the childbirth. Bartok seizes ownership of the infant, Martin, and decides to raise it himself, with the aid of his staff.

While not everyone at Bartok Industries mistreats Martin during this time, Dr. Jainway is particularly callous to him, treating him only as a science project rather than a human being. As the years go on, Martin makes two disturbing discoveries. The first, that the corporation performs cruel experiments on animals, even going as far as purposely keeping the animal alive after the experiment has failed simply to see how long it will take for it to die, and the second, that they only raised him in hopes that he would inherit his father's genius for them to exploit. Martin eventually escapes the facility, but is brought back shortly after. By this time, however, he has already begun making the transformation from man to insect. Hatching from his coccoon, he attacks Dr. Jainway in her laboratory as she is performing tests on him. Martin kills her then leaves to take his revenge on the rest of the Bartok employees.

Retrieved from "https://femalevillains.fandom.com/wiki/Dr._Jainway_(The_Fly_II)?oldid=175367"
Community content is available under CC-BY-SA unless otherwise noted.