Dr. Harleen Quinzel (Mia Sara) is a villainess from the 2002 TV series Birds of Prey.  She replaced Sherilyn Fenn who appeared in the unaired pilot episode.  The show aired only 13 episodes.

Unlike her comic book counterpart (Harley Quinn), very little was known about femme fatale Dr. Harleen Quinzel. After she picked up where The Joker left off, Harleen used her day job as a therapist to achieve her savage purpose - to take control of New Gotham City. Quinzel carried out her sinister agenda from afar, and manipulated others into doing her dirty work for her. Harley quinn birds of prey Harleen Quinzel in Birds of Prey.

In the midst of her plans, Quinzel met regularly with Helena Kyle (Ashley Scott), secretly the vigilante Huntress, who was under court mandate to see Quinzel for anger management issues. Quinzel discovered Helena's secret, when Helena blew her cover to save hostages from the Gotham gangster Clayface (Kirk Baltz) and his henchmen. After she felt that she could trust Quinzel with her secrets, Helena let her guard down and told her everything about her secret identity, including information about her crime-fighting partners, the Birds of Prey.

After Quinzel gained metahuman hypnotic abilities, she set a plan in motion to take over New Gotham and destroy the Birds of Prey. With Helena in her thrall, she managed to infiltrate the Clock Tower and from there broadcasted her hypnotic commands all over the city, and created chaos. Only Barbara Gordon/Oracle (Dina Meyer) remained unaffected, and was able to create a device to reverse the effects of Quinzel's hypnotism to rescue Helena and put a stop to Quinzel's madness before New Gotham tore itself apart. Barbara fashioned reflective contact lenses to block her hypnotic gaze, and a reversal to Quinzel's insanity broadcast. Though Quinzel was defeated, her ultimate fate was left unrevealed. Presumably she would have been imprisoned, quite possibly at Arkham Asylum. 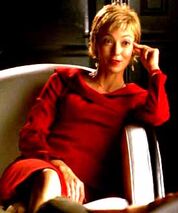 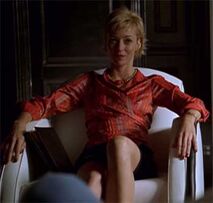 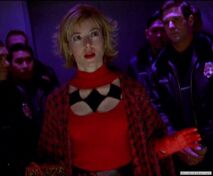 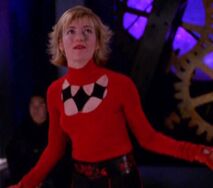 Add a photo to this gallery
Retrieved from "https://femalevillains.fandom.com/wiki/Dr._Harleen_Quinzel_(Birds_of_Prey)?oldid=209742"
Community content is available under CC-BY-SA unless otherwise noted.