Start a Wiki
watch 14:21
The Loop (TV)
Do you like this video?
Dr. Georgina Orwell is the main antagonist of the fourth book in A Series of Unfortunate Events by Lemony Snicket,The Miserable Mill.  She was portrayed in the Netflix series by Catherine O' Hara, who incidentally portrayed Justice Strauss in the 2004 film adaptation.

Dr. Georgina Orwell was presumably a member of V.F.D, however she was on the arsonist side of the Schism and she hated the organization. Her villainly is revealed almost first-hand, when she only appears professional and polite for about five minutes, then makes a sinister comment about how one catches more flies with honey than with vinegar, meaning you're more likely to get what you want by acting more sweet than angry, and she shows the Baudelaires that they are the flies she is talking about, Orwell herself is the honey, and Count Olaf is the vinegar.

In the early chapters of the book, the new foreman at the lumbermill breaks Klaus' glasses, and this prompts him to go to the opticians and get them replaced. First, he goes by himself, and comes back hours later, after Violet and Sunny are scared to death because they know Count Olaf is in the opticians downtown. However, Klaus comes back unharmed, albeit brainwashed. He does not remember who his sisters are, and forgets his own name and even forgets Violet is a girl, when he calls her "sir" for no apparent reason.

Upon the second time the foreman breaks Klaus' glasses, Violet remembers her promise to her parents she'll protect her younger siblings, so she demands she take Klaus to the opticians. The foreman strangely thinks this is a good idea, he says this with a sinister smirk. Then the Baudelaires leave, as this has just been after the hypnotized Klaus broke Phil's leg in an accident. Phil is taken to hospital and Klaus figures he was hypnotized last time. The foreman accidentally said "inordinate" which seemed to unhypnotize Klaus and turn him back to normal. Klaus figures he definitely was hypnotized, citing hypnosis as a science and not magic, despite popular belief. He cites numerous historical cases of hypnosis, including that of an ancient Egyptian pharaoh.

When they get to the opticians, Violet asks Klaus why he's going in. Klaus says he has to and Dr. Georgina Orwell first appears, making herself known to Violet and Sunny. Violet's taken aback by Dr. Orwell, because she wasn't expecting such as polite, professional woman. She feared Orwell would be one of Olaf's associates or even Olaf himself. But instead she is behaving nicely and welcoming them inside. Dr. Orwell says Klaus told her he reads a lot and asks Violet and Sunny if they read. Violet says yes, and Dr. Orwell asks if Klaus encountered the phrase "You catch more flies with honey than vinegar." She says they're wondering why she's bringing it up, but then shuts the girls in with Count Olaf (bizarrely disguised as a lady) and then everything becomes clear.

When Klaus returns hypnotized again, Dr. Orwell then smirks and says that Violet must be stupid for saying "ab" twice (for about and absurd) and Olaf says they must have low self-esteem. Dr. Orwell couldn't agree more, talking as if they're discussing the weather rather than insulting young children. Dr. Orwell dismisses the Baudelaires, Violet cannot believe they're free. But Orwell says Klaus will soon be back as he keeps having accidents. Sunny says they're the result of hypnotism and not accidents but, being a baby and speaking baby speech, no one apart from Violet understands her.

Dr. Orwell wrote an enormously long novel, Advanced Ocular Science, which was a thousand pages and described everything to do with the ocular business. It even talked about hynpotism. Upon learning Sir would fire them and send them to live with Olaf (who he was adamant was an attractive young woman) Violet read about hypnosis in the early hours of the morning in the library. Along with Sunny's help, she learned that one word hypnotized the victim, then another word would unhypnotize him. She guessed that one word had hypnotized Klaus, and wondered what the word was to set him free, but soon the foreman ordered the hypnotized Klaus to set the chainsaw on, to kill Phil by slicing him up.

Fortunately, Violet learned the word to save Klaus was "Lucky", as in "Lucky Smells Lumbermill" and she shouted it out while learning the foreman had been hiding it in sentences, like, "In the name of Lucky Smells Lumbermill!" Violet simply yelled "LUCKY! Push the log away from the saw!" and then suddenly a fight broke out between Violet and the foreman. However, Dr. Orwell turned up in time, and came up with a good one: "LUCKY, do not listen to your sisters!" When the foreman said what a good move that was, Dr. Orwell said "That's why you're only a foreman." She then tried pulling Violet's shoulders with the foreman on the other end, tugging to dislocate Violet's shoulders. But then Sunny bit her. Dr. Orwell said "En garde!" and sliced her sword through her cane. A sword fight began between Dr. Orwell and the baby Sunny, and then Klaus got unhypnotized when Violet realized it was "inordinate" to unhypnotize Klaus. During the fight, the unhypnotized Klaus freed Phil from his fate, and Sir entered the room in the midst of the chaos, demanding to know what the Hell was happening in his mill. Dr. Georgina Orwell was so shocked that she took a step backwards... into the whirring saw.

As it happened, Dr. Orwell was sliced to shreds in a gory scene. Sir called Mr Poe, who was so shocked he cancelled all appointments that day and took the first train to the lumbermill, to sort out the Baudelaire's arrangements.

Orwell's fate differs in the TV series as instead she attempts to burn Sunny in a furnace after the failed attempt at killing Klaus, however as soon as the enraged group of mill workers break into the warehouse to confront their brainwasher she panics and backs away hastily before tripping and falling into the furnace. 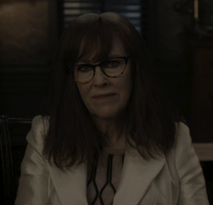 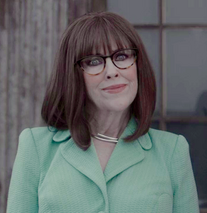 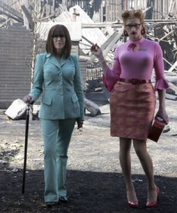 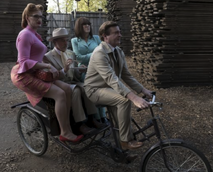 Add a photo to this gallery
Retrieved from "https://femalevillains.fandom.com/wiki/Dr._Georgina_Orwell_(The_Miserable_Mill)?oldid=160963"
Community content is available under CC-BY-SA unless otherwise noted.