Start a Wiki
watch 01:48
The Loop (TV)
Do you like this video?
Dr. Elena Kinder (Kathleen Turner) is the main antagonist in the 1999 movie "Baby Geniuses".

Dr. Elena Kinder is the director of BabyCo Corporation and the partner of Dr. Heep (Christopher Lloyd).  She kidnaps babies from the orphanage in Pasadena City and brainwashed into becoming superhuman.  Dr. Kinder messes with the brains of the infants, giving them superpowers that only last until three years old, at which the babies become normal humans.

Dr. Kinder has brainwashed Sylvester and his twin brother Wit, and her brainwashing method, "The Kinder Method" has made the babies telepathic.  Unfortunately, they do not know about each other.

Sylvester escapes BabyCo and heads off to the city.  Dr. Kinder sends her men to capture him, but due to their identical looks she kidnaps Wit instead, confusing Robin, who gets Sylvester.  Dr. Kinder realizes her mistake and tries to kidnap Sylvester, sending her agents, but they are thwarted.  Dr. Kinder promises she'll move her headquarters to Liechtenstein in Europe, proclaiming it as the worst country in Europe.  Dr. Kinder tries to brainwash Wit but she can't.

Later, Sylvester mobilizes the other infants to brainwash a coach driver to take them to BabyCo where they fight the scientists.  Dr. Kinder meets Robin who is looking for her child.  Dan (Peter MacNicol), Wit's stepfather, can understand the baby language and he joins in the fight.  Robin confronts Dr. Kinder and the two have a duel on the roof whilst hanging onto an airborne helicopter.  Robin calls her auntie, but Dr. Kinder yells at her that she took Robin from the orphanage and raised her, that they aren't related.

Upon her defeat and the helicopter being forced to land by the combined brawl and the demands of the police, Dr. Kinder is arrested for child abuse. 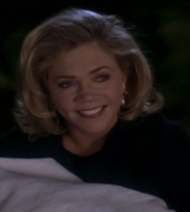 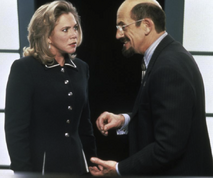 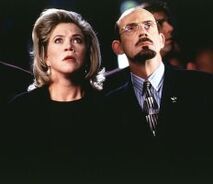 Add a photo to this gallery
Retrieved from "https://femalevillains.fandom.com/wiki/Dr._Elena_Kinder_(Baby_Geniuses)?oldid=163445"
Community content is available under CC-BY-SA unless otherwise noted.