Start a Wiki
watch 01:51
The Loop (TV)
Do you like this video?
Dr. Catherine Kelly is the villainess of "Things Fall Apart", case #32 of Criminal Case: The Conspiracy, the 5th season of the crime solving game Criminal Case (release date August 23, 2018). She was a psychiatrist specifically hired by technology firm DreamLife to provide psychiatric care to the company's employees. Catherine first appeared in case #31, "Domesday", before being revealed as a villainess in "Things Fall Apart".

Prior to the case's events, DreamLife had hired the services of geologist/meteor expert Mortimer Pickering for their secret research of a meteor that had fallen in Grimsborough and was believed to have healing properties. But unbeknownst to DreamLife, "Mortimer" was really Grimsborough Lab Chief Rupert Winchester, an former Oxford classmate and friend of Mortimer's who had agreed to go undercover as Mortimer to find out more about DreamLife's activities. While the ruse worked for much of the DreamLife staff, Catherine (who had dated Mortimer briefly during their time together in Oxford) began to grow suspicious.

Catherine attempted to explore her suspicions by scheduling appointments with "Mortimer", only for Rupert to cancel them. It was then that Catherine remembered Mortimer's habit of switching places with Rupert in college, leading her to realize that Mortimer was really Rupert in disguise. Infuriated, Catherine went to Rupert's room to confront him, catching him as he was talking to David Jones and the player via his communication watch. Angry, Catherine smashed the watch and ripped off Rupert's fake beard as she confronted him about his lies, with Rupert still attempting to claim he was Mortimer. In a rage, the evil Catherine sprayed Rupert in the face with a nerve gas containing hemlock, with the poisonous gas killing Rupert as he attempted to flee the DreamLife facilities.

Catherine used a handkerchief to cover her mouth and nose as she poisoned Rupert, with strands of her hair on the handkerchief being among the pieces of evidence proving her guilt. When confronted by the player and David, Catherine continued to plead her innocence before confessing to killing Rupert, revealing how her past relationship with Mortimer allowed her to uncover his deceptions and blasting Rupert for lying to her and everyone else at DreamLife. In response to David's outrage at Catherine murdering a member of the police force, Catherine remorselessly stated she would do it again if she had to, claiming she was protecting the great work being done by DreamLife. Catherine was arrested and put on trial, where she simply stated to judge Judith Powell that she did what she had to do. After noting that Catherine's actions didn't reflect well on DreamLife as a company, Powell sentenced Catherine to life in prison, with the villainess boasting that her knowledge of psychology would allow her to survive prison. 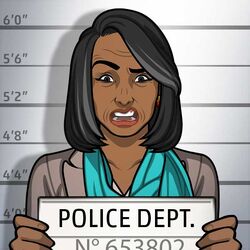 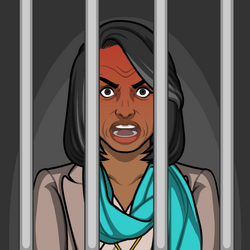 Add a photo to this gallery
Retrieved from "https://femalevillains.fandom.com/wiki/Dr._Catherine_Kelly_(Criminal_Case)?oldid=144734"
Community content is available under CC-BY-SA unless otherwise noted.